Four months, Latin American countries, like many regions around the world, are still deeply engaged in a deadly fight against COVID-19.  Currently, Brazil has the second-largest infected population in the world and the Latin American and the Caribbean (LAC) countries together account for more than one-third of the daily newly confirmed cases worldwide. Confirmed cases had surpassed 16,000 per million in Chile, the third-highest in the world, and almost 10,000 per million in Peru, the fifth highest. According to the Luohan Academy’s PET project, the doubling days of confirmed cases in Latin America, a measure used in tracking both the growth of the epidemic and its containment, is still less than 40. What’s perhaps more troubling is that some Latin American countries, such as Argentina, Paraguay, and Chile, face decreasing doubling days, indicating that the epidemic is exacerbating and far from being under control. 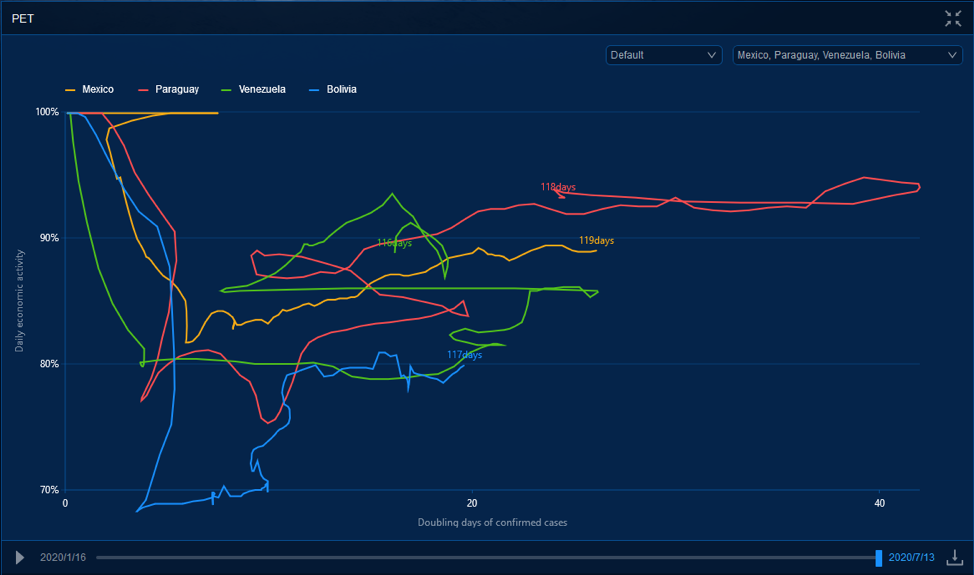 Latin American countries are especially vulnerable to COVID-19 due to their large urban populations. Many residents are more impoverished and lack the medical infrastructure needed to contain the virus, let alone even test for it. Nearly 113 million people live in slums in Latin America and the Caribbean countries (see figure below), accounting for about 20 percent in the population. Residences in the slums live in cramped houses and short of nutrition, clear water, and medical care, making them highly prone to infectious diseases. For instance, in 2011, 60 percent of the Tuberculosis cases in Peru were found in slums.  Hospital beds per thousand are 2.2 in Brazil and Chile, only half of that in high-income countries, which contributed to the high death rates in these countries. Population living in slums (% of urban population) in Latin American and Caribbean countries.

The pandemic hits Latin American countries, especially hard in a time of economic difficulty. Most states had low GDP growth rates of 0-2 percent in 2019 or even a negative growth rate as in Argentina. According to PET, by the end of the second quarter, the economic loss in Peru has been roughly equivalent to 7.5 percent of its 2019 GDP. For Argentina, it’s 5.3 percent, and for Brazil, it’s 3.4 percent. With the COVID-19 still ravaging in most Latin American countries, this loss is expected to further grow in the coming months.

The large proportion of the workforce in informal sectors of Latin America lack labor protections, thus are highly vulnerable to the lockdown policies.  For instance, in Columbia, 57 percent of total non-agricultural employment work in the informal economy in 2019, according to the International Labour Organization.  When COVID-19 slows down the economy, they are in a tough situation to find new jobs to withstand the negative shock.  In Brazil, the employment rate dropped by 50 percent by May 2020, the highest since the statistic started in 2012.

In Latin American countries’ external debt complicates things, especially when considering their economic recovery. A recent study by Patrick Bolton, Luohan Academy academic committee member, shows that Latin American countries are most likely to be affected by the potential sudden stop of capital inflows. The shortfall to roll over their external debt is estimated at $276 billion, 5.76 percent of the region’s total GDP.

Uncertainty of Latin American economies increases when bulk commodity prices become volatile in the global economic turmoil. WTI crude oil price decreased from $60 in Jan 2020 to $12 in April 2020 and rebounded to $40 in June 2020. The volatile oil price largely affects Venezuela's economy, whose oil export comprises 95 percent of total exports and 25 percent of GDP. As the external economic environment becomes less predictable after COVID-19, Latin American countries’ path to economic recovery will be long and winding.

Latin America’s situation isn’t all pessimism. The IMF has supported suspending debt service payments to official creditors and G20 countries could make some US$12 billion available to 73 low-income countries. To this notion IMF Managing Director, Kristalina Georgieva, in a recent speech spoke to turning the economic turmoil created by COVID-19 to opportunity for Latin American countries. Saying, “We are aiming to land on the other side of this crisis with an economy that is more resilient, greener, smarter, and fairer.”