Before starting at the University of Chicago, in 2019. I graduated from Stanford GSB in economics in 2019, and Paul Milgrom was my co-advisor. Paul is an incredibly broad-minded economist and thinker. Ten of his most cited academic papers are spread across more than five different fields. In recent years, he's been collaborating with computer scientists on building the broadcast incentive auction along with a complex SATFC[1]. It's really inspiring that Paul is continuing to learn new things, draw connections between fields, and push the boundaries of auctions. 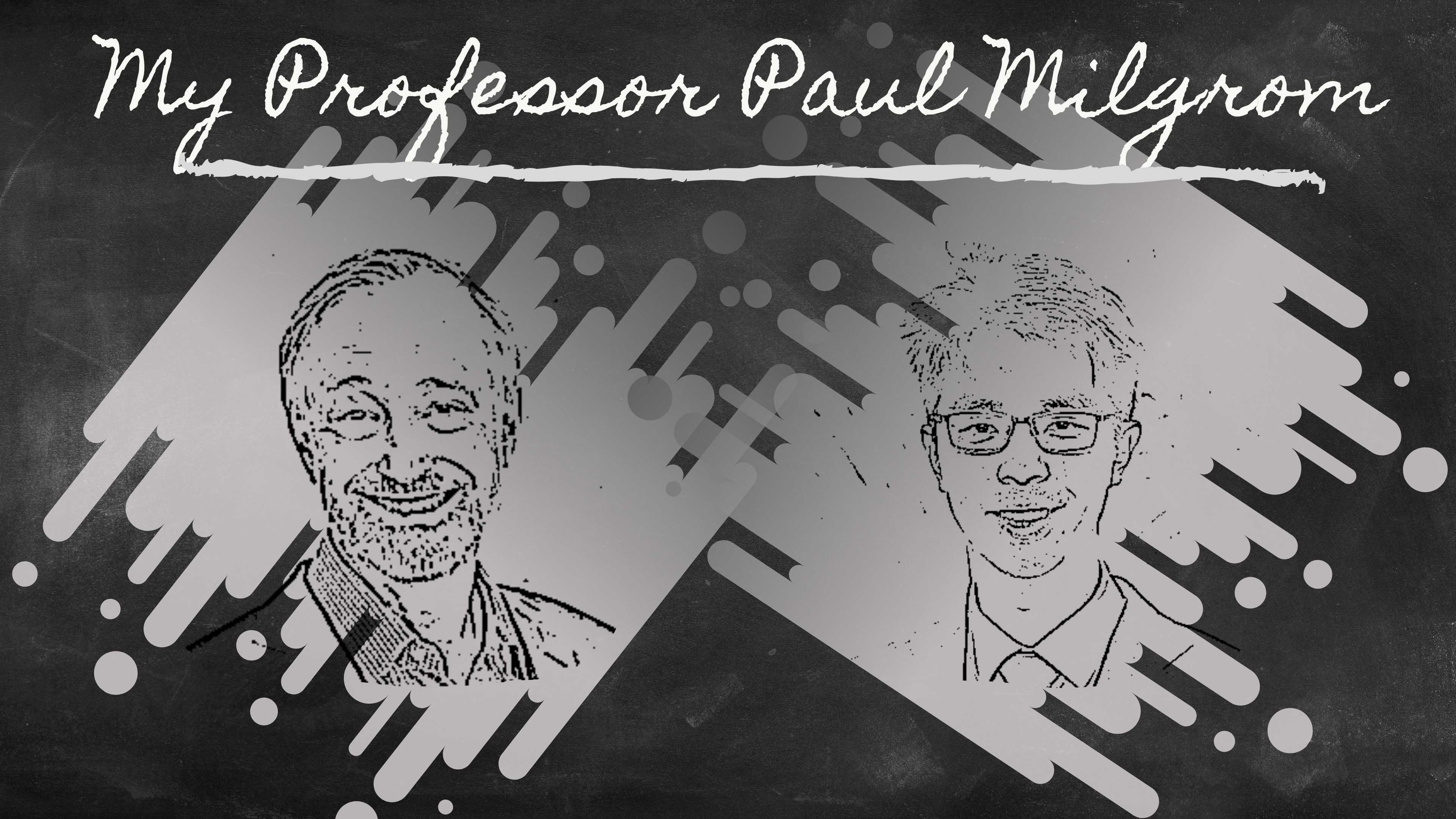 Among auction theorists, Paul Milgrom is definitely one of the most important contributing theory models. In terms of theory, Paul contributed to almost every major field of econ theory and has many citations. However, his contribution is even more important in terms of practice, as he has consulted and been involved in the design of spectrum auctions since the first one in 1994. If one looks at the Nobel committee's writeup, what really won Paul's Nobel prize, was his work to bring his seminal theory into practice by implementing auctions. Still, much of his work isn’t very well cited because they’re situation-specific and don’t generalize well, though extremely important. I’ll try to summarize some of his most famous work here:

In 1959, The FCC allocated radio spectrums by soliciting and evaluating applications. It’s a very discretionary process that is time-consuming and resource-intensive. The great economist Ronald Coase came up with an interesting idea: let's auction the spectrum! Whoever wants to pay the most for the spectrum should get it. The government would save time on processing applications and would also increase revenue from spectrum sales. Coase testified in front of the FCC in 1959. At first, the FCC thought this idea was laughable and that by simply auctioning the spectrum to the highest bidder would never work. Because of that, it took 35 years since 1959 for the FCC to even bother trying this approach. The first big spectrum auction was the nationwide narrowband personal communication services (PCS) auction. One of the teams working on the design was McAfee and McMillan. The other two were, of course, Milgrom and Wilson. (A funny intervening episode: at some point before the auctions, the FCC didn’t have the bandwidth (pun intended) to process all the applications, so it chose to assign them by lottery. Coase theorem means the market will work its way to efficiency, right? Well, it worked terribly). When the FCC realized that an auction might actually work, lots of spectrum auctions were tried in various parts of the world. Nowadays, most of the world's spectrums are divided and sold by auctions.

Spectrum auctions today run on a pretty specialized process, quite different from what is taught in graduate theory classes. Stuff like simultaneous ascending auctions, combinatorial clock auctions, clock-proxy auctions, e.g., Why isn't this taught much? Because it is somewhat specialized in the spectrum auction setting. The 1-unit setting is clearer for teaching grad students the single-parameter mechanism design. The institutional constraints around spectrum allocation are really messy and detail-sensitive. There are lots of licenses at once, overlaps between different parcels, with weird combinatorial stuff. The incentive auction involved lots of work from CS folks, like Kevin Leyton-Brown, working out how to combine an auction with basically a knapsack problem solver. This is hard stuff even to summarize, let alone explain, and there are theories behind it, thanks in part to Paul Milgrom, who has a line of work on "gross substitutes" and the SAA, matroids, stuff like that.

It also doesn't generalize as neatly as 1D mechanism design, which probably is why it isn't taught much. The point is that the stuff actually used in practice is often a lot less direct than what is taught in grad school classes. At some point, literature diverges. Lots of papers that receive attention in the theory literature don't apply much in practice. Lots of practically important stuff in specific settings don’t always receive much attention in the theory literature. Another example of the auction process is online ad auctions. Companies like Google and Facebook have come up with clever hacks like "bid pacing." I worked on Facebook's ads team in 2013 and was fascinated by the whole thing. It seemed to make a lot of sense but didn't really look like anything I had seen in class before. Maybe the moral is that the applied and theory lines of work on auctions seem to have diverged slightly. There is a lot of cool applied theory that affects billions of dollars for which economists pay little attention, which is potentially an area for doing some work. Market design is messy, complicated, detail sensitive. But so is the real world! If one wants to do work that actually makes a difference in the world, you have to deal with that and willing to roll his sleeves up and deal with the messiness of real problems to make a difference. It’s really inspiring and really a goal that I'm striving towards in my research.

Paul still does a lot of work, both on the academic and policy sides. On the policy side, he was recently involved in designing the incentive auction in 2017, which is a big collaboration between economists and computer scientists. That's a tough problem for two reasons. First, it is a double auction: it's simultaneously buying spectrum from TV broadcasters, repackaging it, and selling to new buyers. Second, the “repackaging" process means there are many complex constraints, which basically are NP-hard problems requiring complex Computer Science methods. Lots of CS scholars, like Kevin Leyton-Brown, work with Paul.

Paul also writes several policy papers related to his work. For example, this one with me and Glen Weyl: redesigning spectrum licenses (2017) and this FUEL for 5G: Flexible Use and Efficient Licensing (2019). He also still works on basic research. He has a recent game theory paper with Josh Mollner: Extended Proper Equilibrium. Basically, an equilibrium refinement. And he has a paper on investment incentives in mechanisms with some of his students: Investment Incentives in Near-Optimal Mechanisms. So, Paul is still very active in a lot of directions.

Paul's interdisciplinary focus really helped his students. I started working on my job market paper topic because Paul invited Darrell Duffie to his group to talk on auctions in finance, which got me started working on finance. I presented different versions of my job market paper to Paul about 10 times. He showed up to every talk even he was probably really bored at the end. But that's just going to show just how much time he spends on his students. I would not have my job market paper if not for Paul's advice and support, Paul’s students’ group, and some luck. Paul is very generous in spending time with his students. It was also imperative to him that students learned how to present well on academic aspects. After each student presents in his group, we would go around the room, and each student in the audience had to comment, both on the academic content and the presentation style of the presenter. This feedback process sometimes took as long as half the entire talk! Paul's students have done extremely well. I think a big reason for this is that Paul pushed us to work on interesting and important problems and learn to communicate our results clearly and directly.

Paul is very successful in recognizing and creating world-class opportunities for his students. In 2017, Piotr Dworczak placed at Northwestern; Mohammad Akbarpour returned to Stanford GSB in 2016 after visiting Chicago; in 2015, Ning Yu found a job at Emory University, and Shengwu Li found a job at Harvard. Shota Ichihashi has his job market paper published in the American Economic Review (AER) just one year after graduation. I think it is partly selection (only the best students have him as an advisor), but there is a big treatment effect. He gets many smart people in a room together frequently; there's a lot of conversations about papers and other more general questions like important things happening in economics and society more broadly. I think Shengwu's job market paper came out of an off-topic discussion in the group. It's a fascinating model. The core things I took away are: first, spend time talking about papers and giving people feedback on things like presentation skills; but second, also just get smart and interesting people together to talk frequently. Cool things happen in those kinds of environments.

[1] SATFC is an algorithm based on propositional satisfiability (SAT) to solve the station repacking problem in spectrum incentive auctions.

Anthony Lee Zhang is currently an assistant professor of finance at the University Chicago Booth School of Business and a non-resident scholar at Luohan Academy. His work focuses on market design, and research covers topics such as financial derivatives, housing markets, bilateral bargaining, and the allocation of natural resource use rights.

A Model of Cryptocurrencies | Luohan Webinar

On the Rights and Protection of Privacy | Frontier Dialogue