Luohan Academy's Pet Weekly Analysis: More Than Half of the World Is Still in the Trough

Over the past week, the COVID-19 pandemic has further accelerated, with a record-breaking number of newly confirmed cases. In the meantime, pandemic economies across countries and regions are diversifying, but the world as a whole is still in the trough.

The US is among the very few developed countries still had not started to recover, with a large number of daily new cases and fewer recoveries. Most emerging and developing economies in Asia, Africa, and Latin America have been trapped in the pandemic economy for nearly three months and have paid high life and economic costs, even triggering widespread social conflicts and geopolitical risks in some areas. Besides Brazil, the current global epicenter, India’s situation is also quite notable and has global significance.

LHA’s Global Pandemic Economy Tracker covers 132 countries and regions around the world. Together these economies account for 87% of the world's total population and 97% of the total GDP. As of June 20th, 63 of these economies have entered the Recovery phase, a slight increase from 61 in the previous week, while 59 are still in the Response or Trough phases, mostly from Africa, Asia, and Latin America, besides the US. 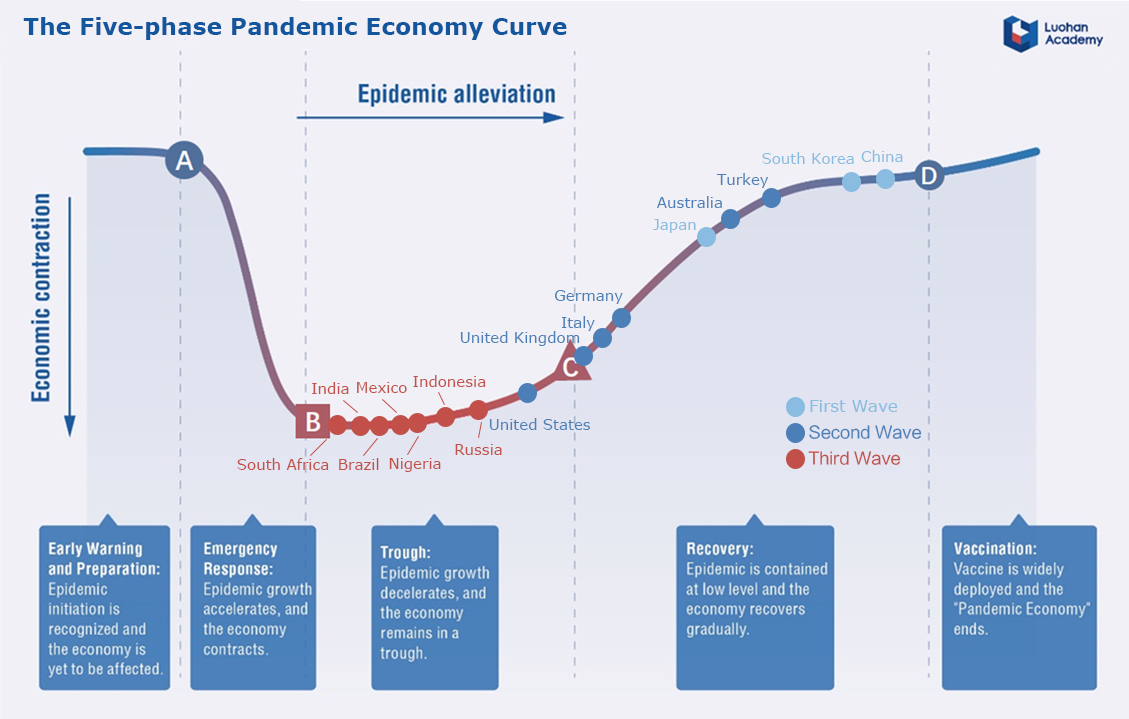 Source: PET project, using data (by June 22nd) from Amap, Apple, Baidu, Google, Wind, ECDC, the Johns Hopkins University, and the NHC of China. For more information about PET methodology and dashboard, please visit – www.LuohanAcademy.com/PET. Note: DPM is the acronym for the number of deaths per million people.

At present, the economies in the Recovery phase account for 42.5% of the global GDP, and their average economic activity level has increased to 93.7% from 92.7% last week. The cumulative number of COVID-19 cases in these economies is 1.724 million, of which 306,000 are currently active, a decrease of 17,000 from last week. A total of 1,562 deaths were observed in the past week.

The 59 economies in the Response and Trough phases account for 55.5% of the global GDP, and their average economic activity level rose from 91.1% to 91.7%. The cumulative number of COVID-19 cases in these economies is 6.123 million, about half of which, 3.245 million, are currently active cases, ten times of that in the Recovery phase economies. As the weak medical systems in these economies were further pressured from a net addition of 290,000 active cases from last week, the death toll increased by almost 30,000.

Economies in the Recovery and the Response/Trough phases

* Numbers in parentheses indicates changes from the previous week 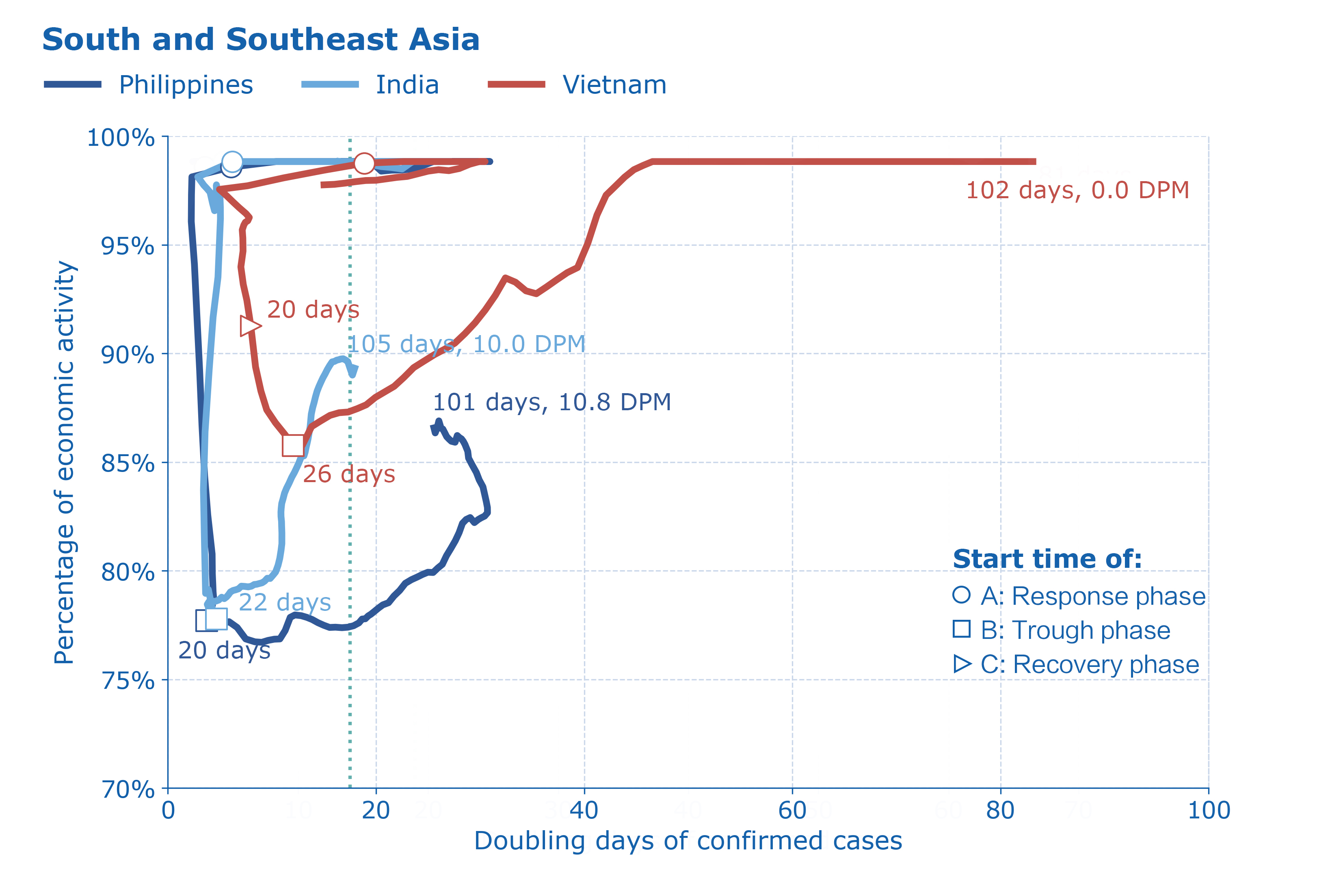 India ranks high among South and Southeast Asian countries in terms of both life and economic losses. According to PET estimates, India’s cumulative economic loss since the beginning of the pandemic is roughly equivalent to 4.2% of its GDP in 2019 and its COVID-19 death rate is 7.3 per million, both significantly higher than nearby countries that have been more effective in epidemic control, such as Thailand and Vietnam.

Sri Lanka incurred a similar level of cumulative economic loss to India, but the death rate is only 0.5 per million population. Indonesia, with a slightly higher death rate than that in India, has a significantly lower cumulative economic loss at 2.4%. The Philippines in Southeast Asia had even higher levels in both economic and life losses and on May 7, 2020Fitch also downgraded the outlook of its credit rating, from positive to stable, the first time that the Philippines has experienced a downgrade in the past 15 years. With a much smaller public debt burden and some fiscal and external investment buffer capacity, the Philippines maintained a higher rating than India.

According to data released by the UK’s National Bureau of Statistics, the GDP in April shrank by 20.4%, the largest monthly decline in history.

The fall of 20.4% of the UK’s GDP in April is consistent with the PET’s estimated 80% level of the average economic activity in the UK in April. While being all English-speaking countries, the UK’s situation is in stark contrast with that in Australia and New Zealand. The latter two acted much more quickly and decisively and by June 20th, the doubling days of confirmed cases in these two countries were both above 80, and the death rates are less than 1% of that in the UK. The relative economic losses in Australia and New Zealand are 2.1% and 3.2% respectively, significantly less than 4.2% in the UK. Compared with the US, although the increasing trend of confirmed cases is better harnessed in the UK, its mortality rate is almost twice as high, and the economic activity, which is currently 86% of the normal period, is also lower than that in the US, 94%. The UK, once advocating a herd immunity strategy and missed the early window of opportunity to control the epidemic, suffers the highest life and economic losses among major economies.

Brazil: the new epicenter and the second million-case country

The cumulative number of COVID-19 cases in Brazil quickly surpassed the Western European countries in early and mid-May. By late May Brazil outnumbered Russia and has since then ranked second only to the US. On June 19, with a record-breaking number of daily new cases of over 50,000, its total cumulative number of cases reached 1.038 million. Brazil and other developing countries in Latin America have become the epicenter and together with the United States, the number of confirmed cases and deaths in entire America now accounts for nearly half of the global total. 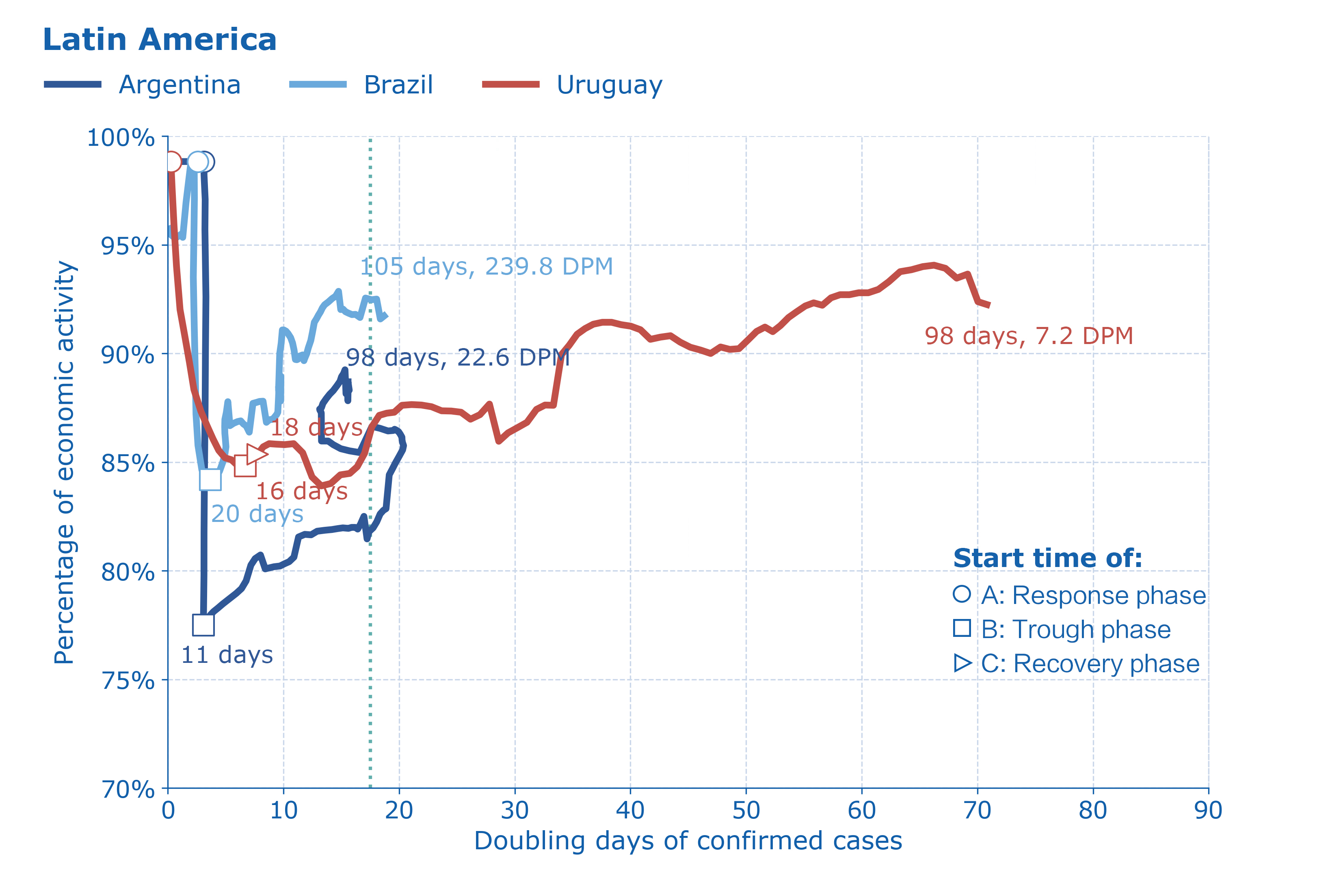 With the exception of Uruguay, a high-income country, the major economies in Latin America are deeply trapped in the hard trade-off between epidemic control and economic growth. Argentine’s initial actions were relatively rapid, with its economy contracting by more than 20% in 11 days, but the later re-opening process was far from smooth. While its doubling day once reached above 20, showing some effectiveness in epidemic control, the increase in economic activity soon brought epidemic growth back. The PET curve turned upward and then left, instead of advancing toward the more ideal upper right region in the graph.

Brazil’s epidemic intervention strategy is largely passive and reactive. President Bossonaro is in many ways similar to the US President Trump, both aligning the COVID-19 with seasonal flu and opposing social distancing and mask-wearing. They insist on re-opening the economies when the epidemic is far from being effectively controlled. As a result, neither the epidemic growth curve nor the economic contraction curve can be flattened, and political and social divergence continued to grow. The current death rate in Brazil is as high as 232 per million, and it is still rising rapidly. In order to quickly alleviate the epidemic, Brazil put their hope on pharmaceutical solutions, and has quickly passed the pilot clinical trials of vaccines from China and the US since mid-June, and even launched clinical trials of hydroxychloroquine, a drug that was promoted by Trump but has been proven ineffective in multiple studies. Considering that Brazil’s governance and economic capacities are far from comparable to those of the US, it’ is not impossible that Brazil’s total cases and the death toll may eventually exceed those of the US in the future, and its economy will also suffer irreparably.

Data, Technology and the Future of Education | Luohan On-Air