This past April, China's central bank caused a national stir when it published a working paper containing the claim that the middle-income trap in Southeast Asian countries is related to universities producing more humanities graduates than science and engineering graduates. Many citizens (presumably, humanities majors) expressed online their unhappiness at the association with economic stagnation, especially as the paper did not include evidence backing up the provocative statement. Crudely made as it were, the statement did seem to touch on a raw nerve – people, it turned out, were quite put off by criticism of their career choice as being somehow inferior or detrimental to collective progress.

The People's Bank of China certainly wasn't the first to opine on better and worse ways talent is allocated in society. Murphy, Shleifer, and Vishny (1991) at the University of Chicago and Harvard University found that economic growth suffers where capable people find greater rewards through rent-seeking than from entrepreneurship. They also found countries with more engineering majors grow faster than countries with more law graduates. Whatever one's feelings on the matter, social-science theory has connected the dots between entrepreneurship, science education, and economic growth.

On April 13, 2021, the Luohan Academy hosted Professor Ruixue Jia from the University of California, San Diego and her talk on "Entrepreneurial Reluctance: Talent and Firm Creation in China". Jia's research, co-authored with Chong-en Bai, Hongbin Li, and Xin Wang, is an empirical examination of whether talented people, as measured by exam score, are likely to create firms in China. The paper represents an effort to test the talent allocation theory proposed in Murphy, Shleifer and Vishny (1991).

Jia's research links college admissions data for 1.8 million individuals in 1999-2003 with firm registration records in China from the 1980s to 2015. It also employs survey data in 2010-2015 containing information about personal traits, wages, and their first jobs. Using the college entrance exam score as a proxy for an individual's general talent, this paper finds that, within the same college, individuals with higher exam scores are less likely to create firms. Specifically, holding all else fixed, exam scores that are one standard deviation higher decreases the probability of creating a firm by 10%.

When individuals do create firms, however, the score is positively correlated with entrepreneurial success, i.e. creating larger firms and being more likely to expand, to enter non-local markets, to survive adverse conditions, and to become listed. The score is also positively correlated with salaries and wages. Aligned with the earlier talent allocation theory, it suggests that those who have high ability, as measured by score, have a choice of both entrepreneurial and non-entrepreneurial activity. 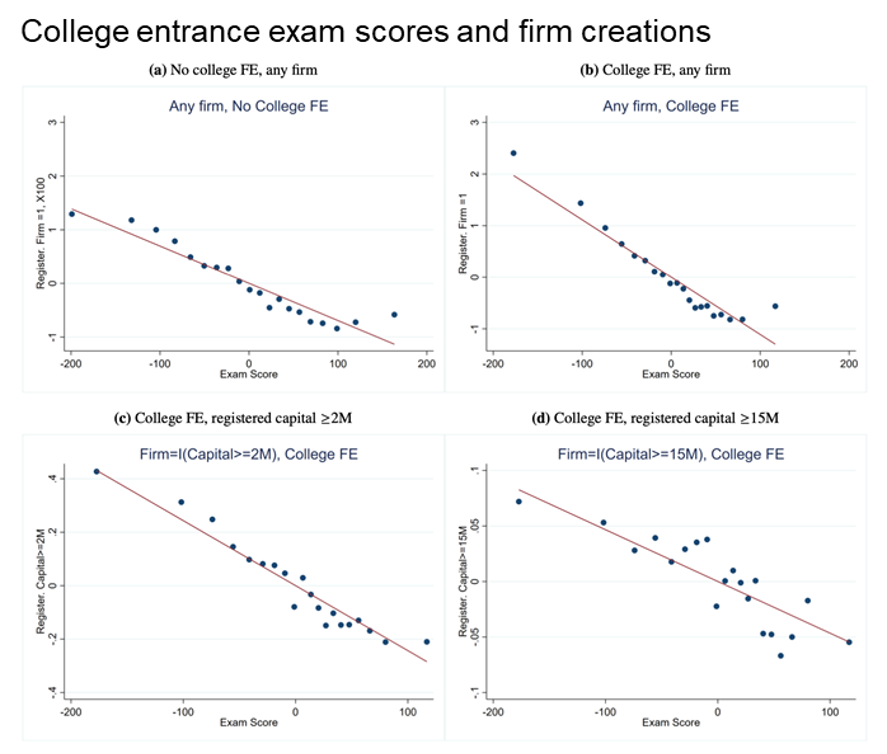 There exists a robust relationship between higher college entrance exam scores and lower likelihood to create firms (from Jia et al. 2021 with permission).

Finally, the paper documents wide variation across industries in terms of the score-firm relationship. Industries with higher state penetration – as measured by the share of state investment in total fixed investment – appear to be systematically associated with entrepreneurial reluctance for high-scoring individuals. In other words, the greater the state's involvement in a specific industry, the more likely talent will choose to rent seek.

The event attracted over 30 scholars from the University of Toronto, the Hong Kong University of Science and Technology, Michigan State University, and other institutions. In the Q&A portion of the talk, Professor Jia and participants had a lively discussion on the effect of culture, regional variations across China, the subjects' family background, peer effects, standalone events such as the private sector migration in 1992, as well as more recent changes in the overall business climate.

While the economic gains from such looser forms of entrepreneurship have dominated more recent scholarship, the economic benefits of firm creation are long established. A question that remains is: Which measures can be taken at the societal level to influence individual choices?" After all, as digital technological disruption and socio-economic realignment continue to roil a multitude of industries globally, this could be an opportunity for change. Unfortunately, the paper does not include policy recommendations, but Jia was unequivocal in expressing that "the reward structure of the whole of Chinese society" as well as how to shift perceptions should be considered.

"Too many people are too conservative," Jia said.

Luohan Academy, 2020, Digital Technology and Inclusive Growth (This book can also be found on Amazon)

Don't Leave It to the Banks to Rethink Payments