"No man is an island entire of itself; every man is a piece of the continent, a part of the main; if a clod be washed away by the sea, Europe is the less, as well as if a promontory were, as well as any manner of thy friends or of thine own were; any man's death diminishes me, because I am involved in mankind. And therefore never send to know for whom the bell tolls; it tolls for thee." 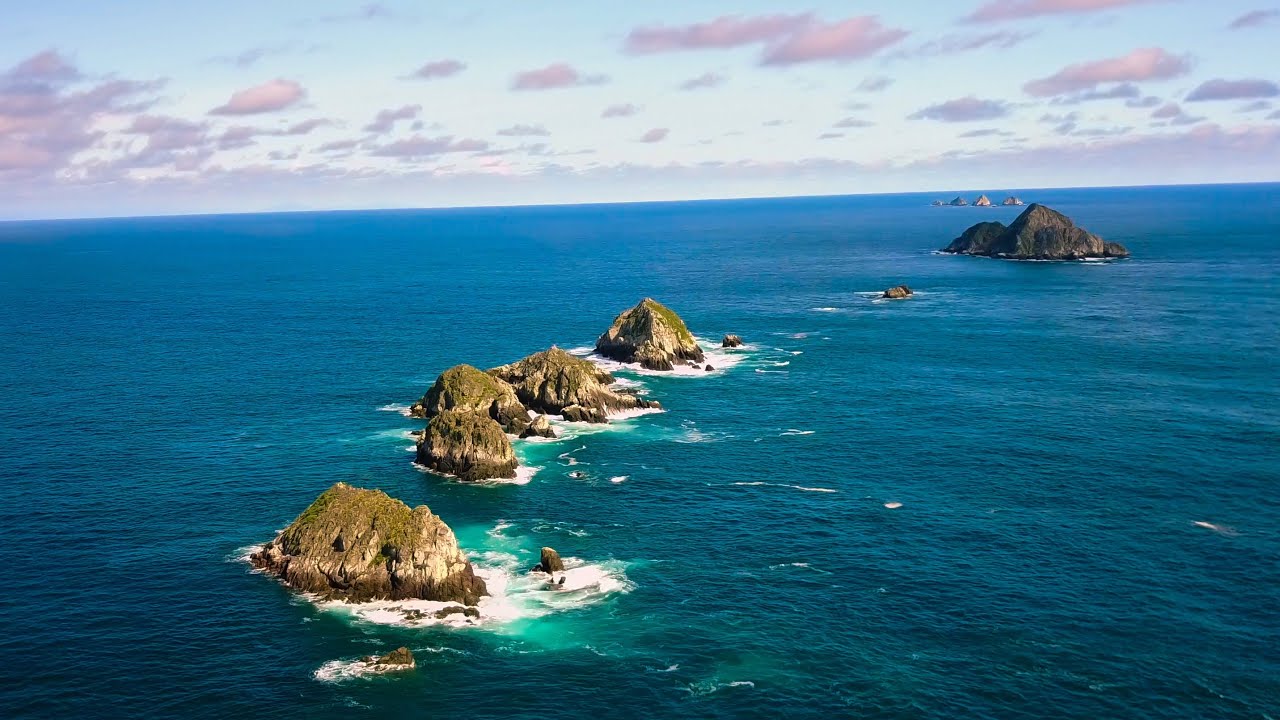 The world is now three months into the vaccination phase of the pandemic era and vaccine allocation among countries is recognized as complex and controversial. Various ethical frameworks, such as the Fair Priority Model, were proposed to deal with the diverse issues ranging from public opinion, diplomacy, to economics, and public health. However, the lack of fairness and equity in access to the vaccine is still serious.

In Jan. 2021, the WHO Director-General called this extremely inequitable global vaccine allocation a "catastrophic moral failure", and pushed the rich countries to release some of their vaccines in the stockpile and share them with the developing countries. While later, the G7 committed to providing more financial support to ensure sufficient funding for the implementation of COVID-19 Vaccines Global Access (Covax) facility in 2021, very few have committed to spare a major part of their existing vaccine orders to developing countries. So far, high-income countries have secured enough doses of vaccines that could vaccinate their population 2.5 times, while low-income countries have access to vaccines that could only cover around 20% of its population, mainly through Covax.

In the meantime, vaccines are administered at a much faster pace in most advanced economies. For instance, Israel has achieved an effective immunity rate of 60%, and in the US, it's expected that 200 million doses may be administered within 100 days of Biden's presidency. While these countries are racing toward herd immunity, at least one third of the nations, mostly in Africa, have not had a single shot. However, recent research shows that these short-sighted decisions will have severe health and economic consequences in both developing and developed countries.

To assess the health consequences of varying vaccine allocation strategies, network scientists at Northwestern University in the US modelled the potential losses of lives in two scenarios. They assumed that three billion doses of vaccine had been available in the early stage of the pandemic. In the uncooperative scenario, high-income countries monopolize and stockpile the first 2 billion doses of a vaccine, and in the cooperative allocation scenario, vaccines are equally distributed according to population size instead of income-level and/or R&D capacity. The model results showed that, assuming an 80% efficacy level of the vaccine (similar to what we have now), equitable global distribution of vaccines would save almost twice as many lives than in the uncooperative scenario. When compared with the cooperative allocation scenario, the high-income countries gain modestly in the uncooperative scenario, while the losses for low-income countries will be devastating[1]. 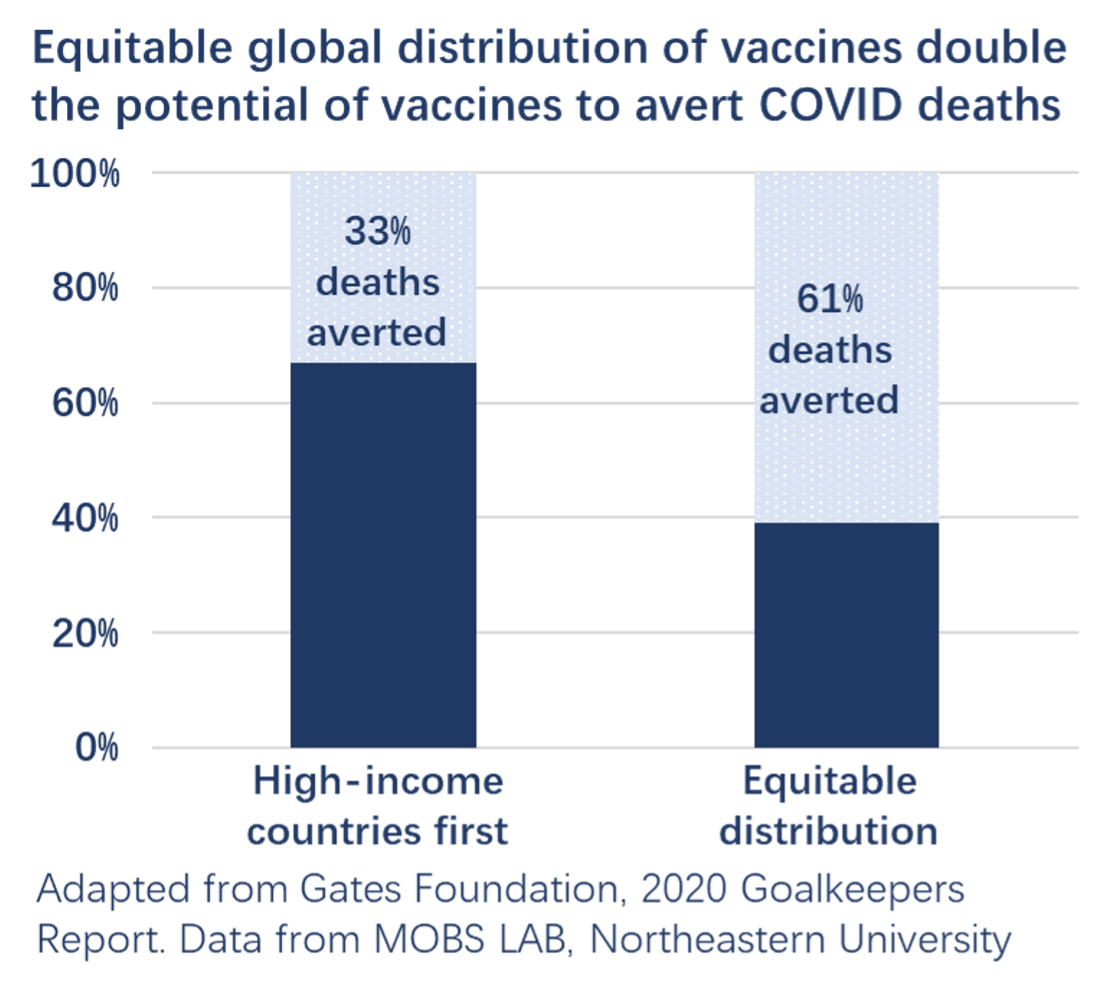 Given the urgent situation that new, more transmissible and deadly, virus variants are emerging and spreading to new territories and have largely caused the most recent wave of the pandemic rebound since Feb. 2021, the potential health benefits of equitable vaccination become more critical. Delaying distribution of surplus vaccines to low-income countries will inevitably extend the length of the pandemic. The longer the virus persists somewhere around the world, the more likely a new vaccine-resistant variant will emerge. This is agreed by the overwhelming majority (88%) of 77 epidemiologists from 28 countries in a recent survey conducted by the People's Vaccine Alliance. Two-thirds of them thought that we have at most one year before the virus mutates to the extent that most first-generation vaccines are rendered ineffective, and new or modified vaccines are required.

Besides health benefits, sharing vaccines with developing countries will also benefit the rich countries economically. The Eurasia Group, a global political risk research and consulting firm, studied ten advanced economies (Canada, France, Germany, Japan, Qatar, South Korea, Sweden, United Arab Emirates, United Kingdom and the United States). They assessed the economic benefits to these countries by contributing to WHO's Access to COVID-19 Tools (ACT) Accelerator program, in particular for securing Covid-19 vaccines for the Low and Lower-middle Income countries through the Covax Facility. They found that an equitable vaccine solution will bring at least US$ 153 billion in 2020-21 alone for the ten countries, and this benefit will increase to US$ 466 billion by 2025. This makes up more than 12 times the US$ 38 billion estimated total cost of the ACT Accelerator.

On a global scale, the short-term economic impact may be even more significant. Economists from Turkey and the US constructed an economic-epidemiological framework that combines a Susceptible-Infected-Recovered (SIR) model with international production and trade network to estimate the potential economic cost for 65 major economies and 35 sectors under three global vaccine distribution scenarios.

In the worst scenario – with wealthy nations fully vaccinated by the middle of 2021 whilst leaving developing countries largely behind in COVID vaccination – the study estimates that the global economy would suffer losses exceeding $9 trillion. Unexpectedly, wealthy countries such as the United States, Canada, and Britain will likely absorb nearly half of those losses. In a more modest scenario, in which rich countries manage to vaccinate all their susceptible population by early summer while emerging and developing economies vaccinate half of their susceptible population by the end of 2021, the world economy will lose a sum of somewhere between $1.8 trillion and $3.8 trillion.

The interdependencies among countries imply that the health and economic drag in one country has short- and long-term consequences for the others. Under the continuing threat of new vaccine-evading variants, the need for innovation and global cooperation to ensure the equitable access of vaccines, tests, therapeutics, and other key resources are more urgent and undeniable than ever. Humanity may not be able to afford another misstep like what we had in the pandemic's early wave a year ago.

Check the Eurasia Group's analysis of the economic benefits and contribution to Act-A and the NBER working paper for The Economic Case for Global Vaccinations via an integrated epidemiological and international production networks model for estimating the short-term economic impact of unequitable distribution of vaccine on both advanced and developing economies.

The Fair Priority Model was proposed as an ethical framework for global vaccine allocation.

The journal Lancet published this article on Challenges in ensuring global access to COVID-19 vaccines in the dimensions of production, affordability, allocation, and deployment.

Why Are There So Many Kinds of Animals… and Products

Economies in the Time of Coronavirus

How Vietnam Emerged as a Model in Fighting Coronavirus