A Tale of Two Nordics

Sweden and Norway are two very similar Nordic countries. Alike in population, geography, and politics. However, in dealing with the coronavirus, they differed in their responses. One became a model country for dealing with the virus, while the other, a pariah. On June 16th, 2020, Norway opened its borders to every Nordic country, less one, Sweden.

Norway was very much right in doing so, COVID-19 in Sweden is ten times as deadly as with their Nordic neighbors. Mainly thanks to months of a failed "herd immunity" strategy that saw much of the country go unchanged day-to-day. While other countries practice social distancing, quarantining, and other social control measures, Sweden did the opposite. They permitted large gatherings to form, schools for younger children to remain open, restaurants to serve late-night party-goers, and mountain resorts welcomed thrill-seeking skiers. Swedish health authorities felt it was better to have much of the country operating somewhat normally instead of shutting it all down.

Conversely, Norway went into lockdown in mid-March, quickly closing schools, restaurants, cultural events, gyms, and tourist attractions. It also banned outside travelers. Norway, which has nearly 5.4 million people, has seen about 9000 cases and 255 deaths, with a death rate of 47.3 deaths per million people. 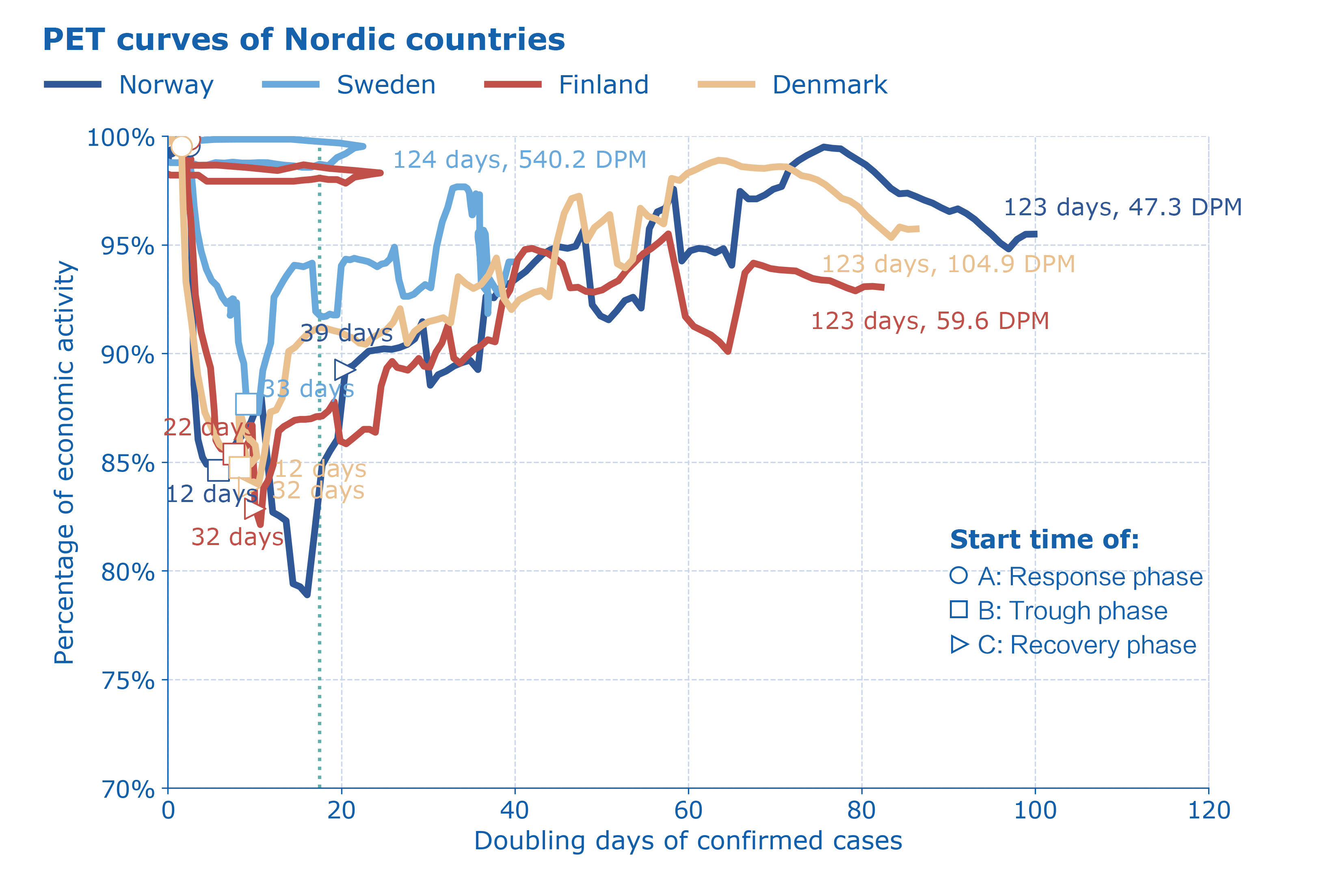 No other chart puts this into perspective better than Luohan Academy's Pandemic Economy Tracker. Norway, which has recently opened its borders to select countries and limited coronavirus measures, has almost wholly recovered economically. As seen from the PET graphs, Norway has surged toward economic recovery, full mobility, and virus containment, while its neighbor Sweden, has yet to contain the virus. A fact that prevents it from achieving full economic recovery.

When analyzing the PET chart of Sweden along with three other Nordic countries Norway, Iceland, and Denmark, all three have a confirmed case doubling day well past 80 days. At the same time, Sweden's confirmed case doubling rate is below 40 days. Their economy, too, has yet to achieve the same normalcy as their neighboring countries. Moreover, there is a human tragedy of Sweden's handling of the virus; they have almost one magnitude higher of death rate than each of their Nordic neighbors, and the total deaths in Sweden are well above other Nordic countries.

Whether it is the number of deaths or return to economic normalcy, the PET chart put in perspective a trend that should have been long evident from the start of the spread of COVID-19. One of the most critical lessons from the pandemic economy is that the faster countries respond with strong containment measures, the quicker countries can expect some sense of normalcy and, more importantly, reduce the highest cost of COVID-19 —the human cost.

Information Is the New Collateral

The Digital Future of SMEs and Employment After COVID-19