Ambitious elimination strategy paid off in New Zealand while conventional mitigation leads to a second wave of the epidemic and economic lockdown in Australia.

Australia and New Zealand were once heralded, together with East Asian countries such as China and South Korea, as COVID-19 success stories, especially when compared with other Anglo-Saxon countries such as the US and the UK. Both prepared early and quickly since February, had rather short Response and Trough phases of about two weeks, and started to recover in early April.

Between the two Oceanian countries, Australia was considered to have performed slightly better than New Zealand earlier.  According to the Pandemic Economy Tracker (PET), at the Trough, Australia's economic activity dropped by about 16% from pre-epidemic normal, a level similar to that of Vietnam.  New Zealand's economic contraction peaked at a 28% decline, higher than most countries, including those once were global epicenters such as China and Italy.  Both economies recovered slowly and steadily in the early Recovery phase, while gradually rolling out their coronavirus contact tracing programs.  Since mid-May New Zealand's economic activity had a sharp increase, surpassed Australia's level on May 21st, and has since then maintained a small margin.  Both countries experienced a large economic loss.  Australia ended its three-decade economic growth, one of the longest in recent history and New Zealand also recorded a 1.6% decline in Q1 of 2020, the largest drop in 29 years, and the first quarterly fall since December 2010.

The synchrony of the two pandemic-time economies came into an end from late June when the second round of COVID-19 emerged in Australia, but not in New Zealand.  After the outbreak appeared in multiple communities nationwide, Australia started to lose control of the epidemic, even with the use of the military to help enforce new rounds of lockdown.  By Aug. 6th, Australia has accumulated almost 20,000 confirmed cases, including 255 deaths.  The total cases and deaths per million population in Australia are 779 and 10, both about 2.5 times of those in New Zealand. The size of the active cases in Australia has reached around 9,000, almost twice its peak value in the first round, making its public health system under high pressure. While people in New Zealand live in a pace similar to the pre-COVID period, various states of Australia entered a new wave of multi-week lockdown with a high level of restrictions including mandatory masks. 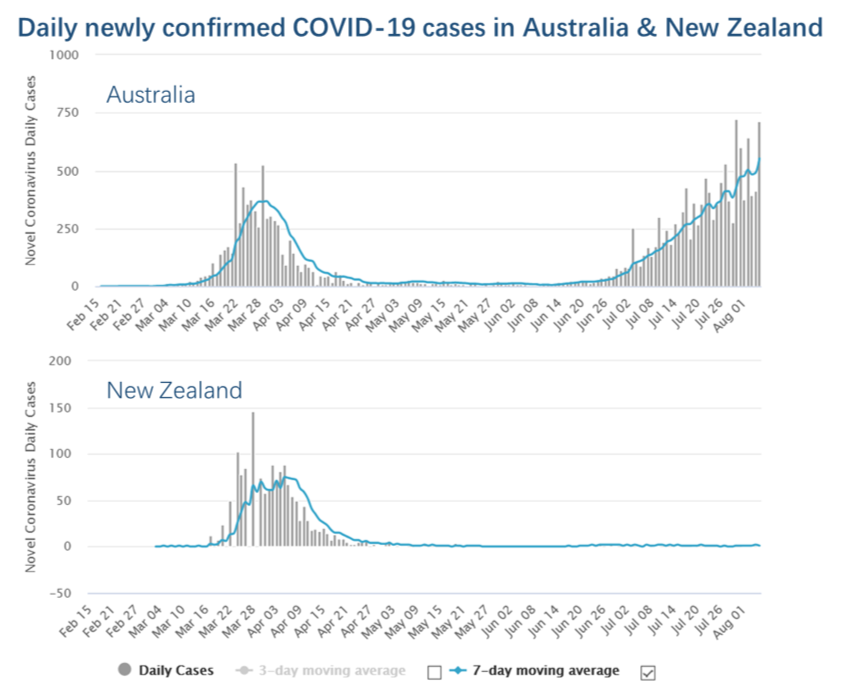 Note: The scale of the two Y-axis differ by five-folds, equivalent to the ratio of the population between Australia and New Zealand. Graph adapted from Worldometer on Aug. 6th, 2020.

This drastic contrast was largely due to the seemingly small difference in the two countries' first-round epidemic control measures.  Australia adopted the mainstream mitigation strategy, often called "flattening the curve", and New Zealand chose the unusual "suppression" strategy that aimed to completely eliminate the virus.  New Zealand's choice was based on quick learning and rigorous science. Epidemiologists in New Zealand carefully studied existing models and evidence before the outbreak, and, found that "the strongest evidence that containment, on the path to elimination, works comes from the remarkable success of China in reversing a large pandemic"[1] and decided to adopt the ambitious East Asian strategy of elimination (even without a vaccine), instead of the more familiar mitigation strategy that was mainstream in the Western world. Within three weeks since the first case was found on Feb. 28th, New Zealand implemented "the most decisive and strongest lockdown in the world at the moment", when there were only 102 cases recorded with no death. In comparison, China started lockdown when there were more than 500 cases and the UK locked down when it had more than 6,500 cases and more than 330 deaths.

As a result, while both countries had a very similar pattern of the first-round epidemic cycle (see Figure above), New Zealand achieved its first zero-case day in early May, a month-long streak of zero-case days in May to June, and very sporadic cases since then, and Australia constantly had a couple of dozen cases daily since May. In short, New Zealand was the only western country with a goal to eliminate COVID-19 and succeeded by far.  Strong leadership, especially that from the Prime Minister Jacinda Ardern, and coordinated communication also played critical roles in effectively enforcing the various rules associated with the nationwide lockdown.

The economic benefit is obvious. Michael Baker, the epidemiologist who advised the New Zealand Government on its response, told the journal Lancet that "The two biggest benefits of pursuing an elimination strategy is that you have few cases and few deaths and you can get business back up and running."  As the economy recovered better than expected, the New Zealand government is abandoning the earlier plan of "helicopter" cash distribution, instead, it is strengthening financial preparedness for a potential second round.  However, Australia is expected to have a 7% contraction of GDP in the second quarter, pushing the economy into recession for the first time in three decades, despite an increase in export value in June, largely due to strong demand for iron ore from China in the context of China's infrastructure-centered recovery stimulus plan and a more troubled pandemic economy of its main competitor Brazil.

We need to rethink trade-offs and synergies in the dynamic pandemic economy era.  At least for the advanced economies, strong epidemic control should always be a key component of any pandemic economy policy portfolio.

Wei Liu is currently a senior economist/ecologist at the Luohan Academy and conducts research and communication of the human future in a more digitalized world. I've previously held positions in Europe and the US, for which I have led research projects in multiple Asian, African, and European countries and supervised 20+ Ph.D. students from top universities across all continents.

[1] Baker, M. G. et al., 2020, New Zealand's elimination strategy for the COVID-19 pandemic and what is required to make it work, The New Zealand Medical Journal.

Why Are There So Many Kinds of Animals… and Products

A Tale of Two Nordics

The Digital Future of SMEs and Employment After COVID-19