Unless specified, the latest data by Sep 11, 2020. Please check here to see why this tracker can be a useful tool.

The first wave puts into perspective the fundamental tradeoff of the “Pandemic Economy” that if a country takes decisive and rapid measures to control the epidemic, the economic and health costs can be diminutive.

Figure 1: How far have countries in the first wave progressed? 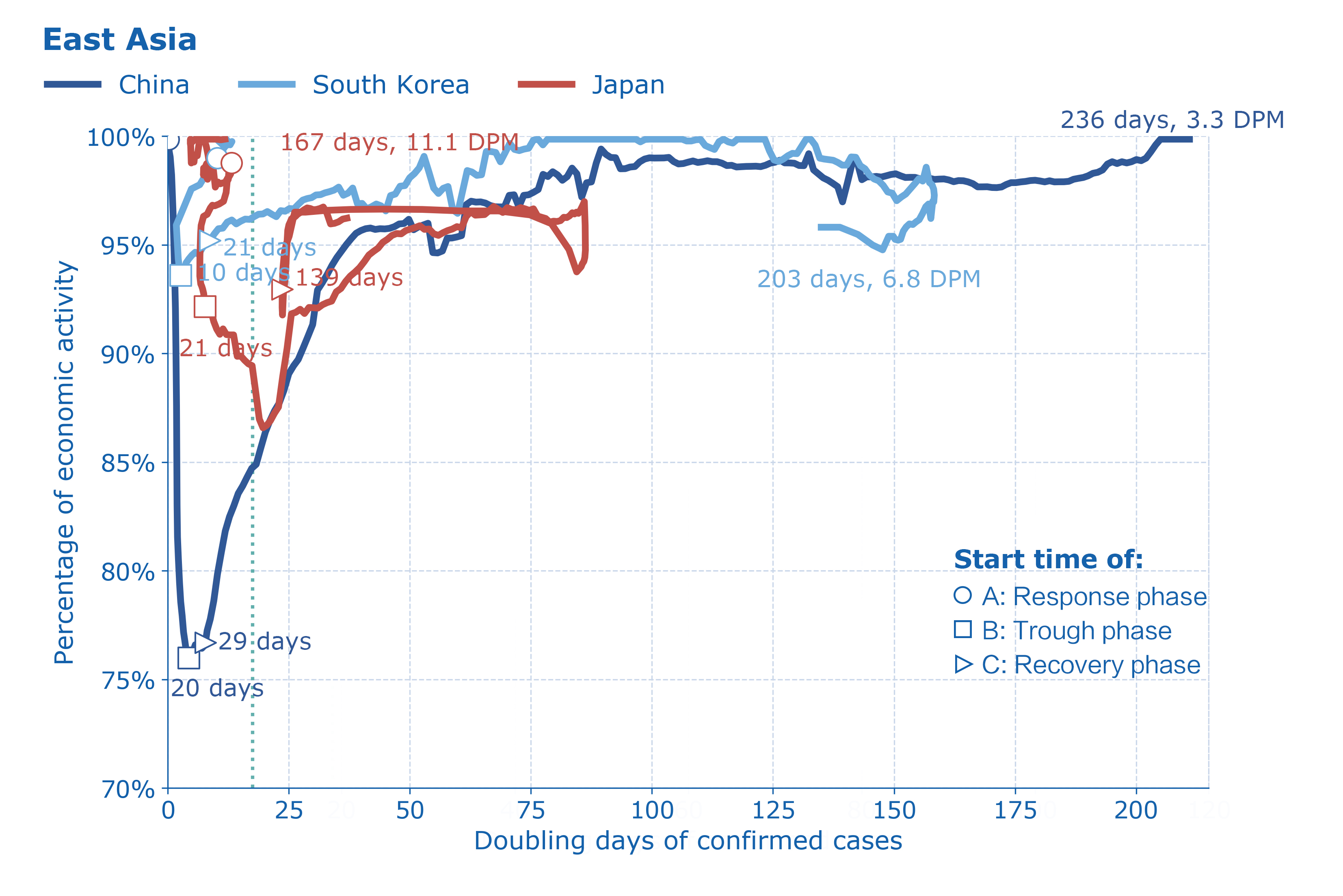 The advanced economies were hit in the second wave of the pandemic. Having paid substantial life and economic costs, most of them have entered the Recovery phase, with a few still remaining in the Trough. 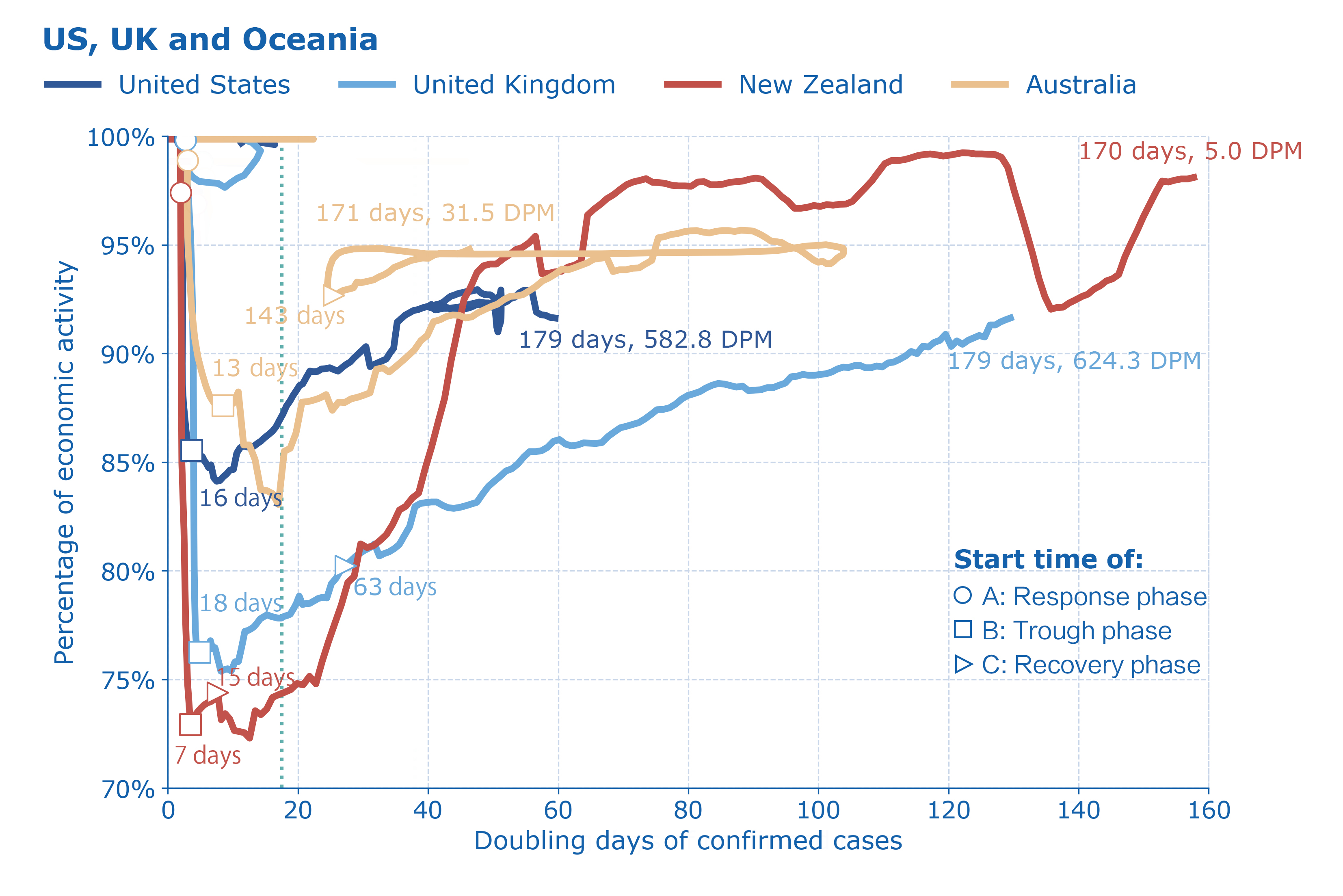 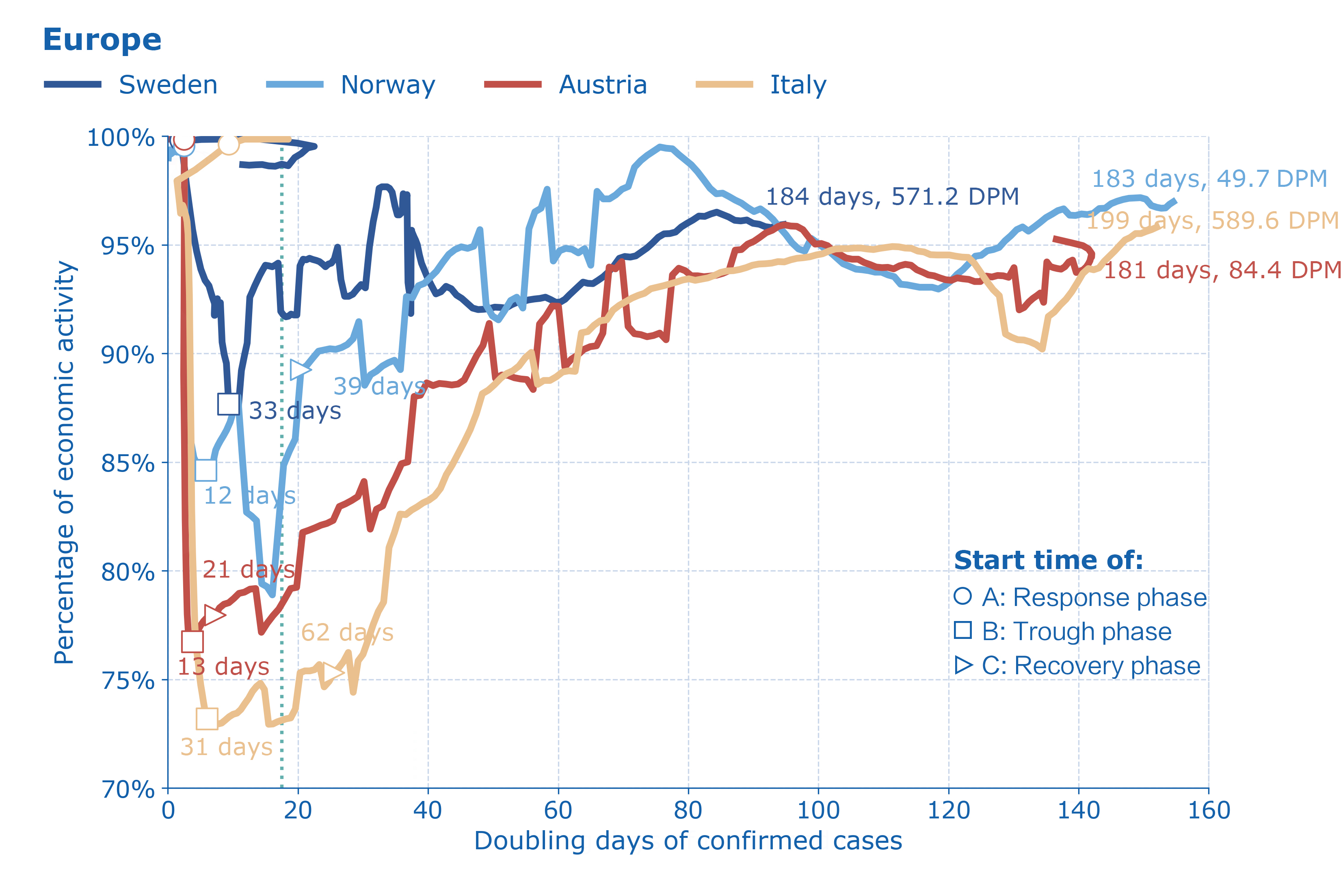 The third wave has become the epicenter of the pandemic, with confirmed cases from these regions accounting for more than 70% of the global total.

Figure 3. The evolution of the global pandemic economy 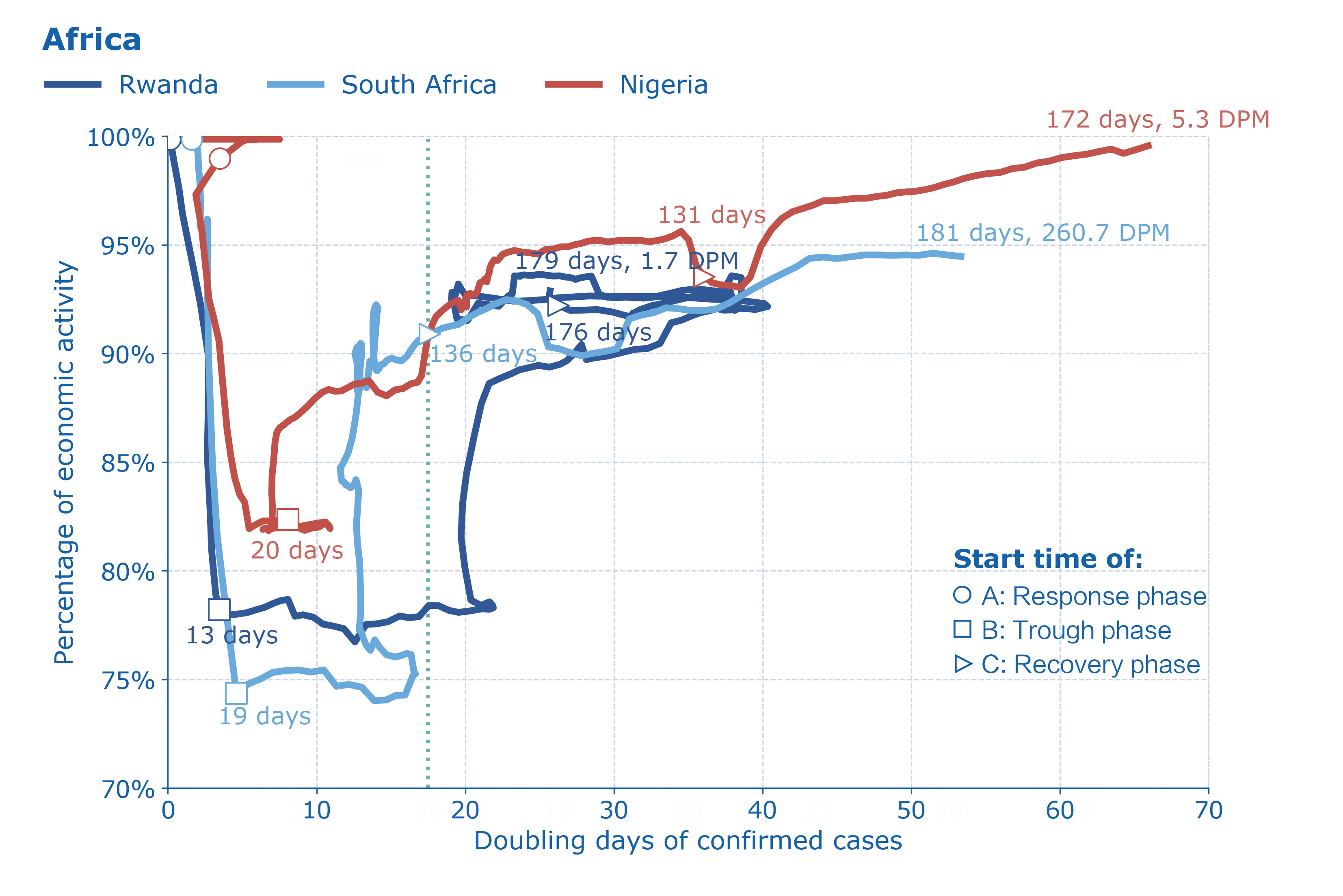 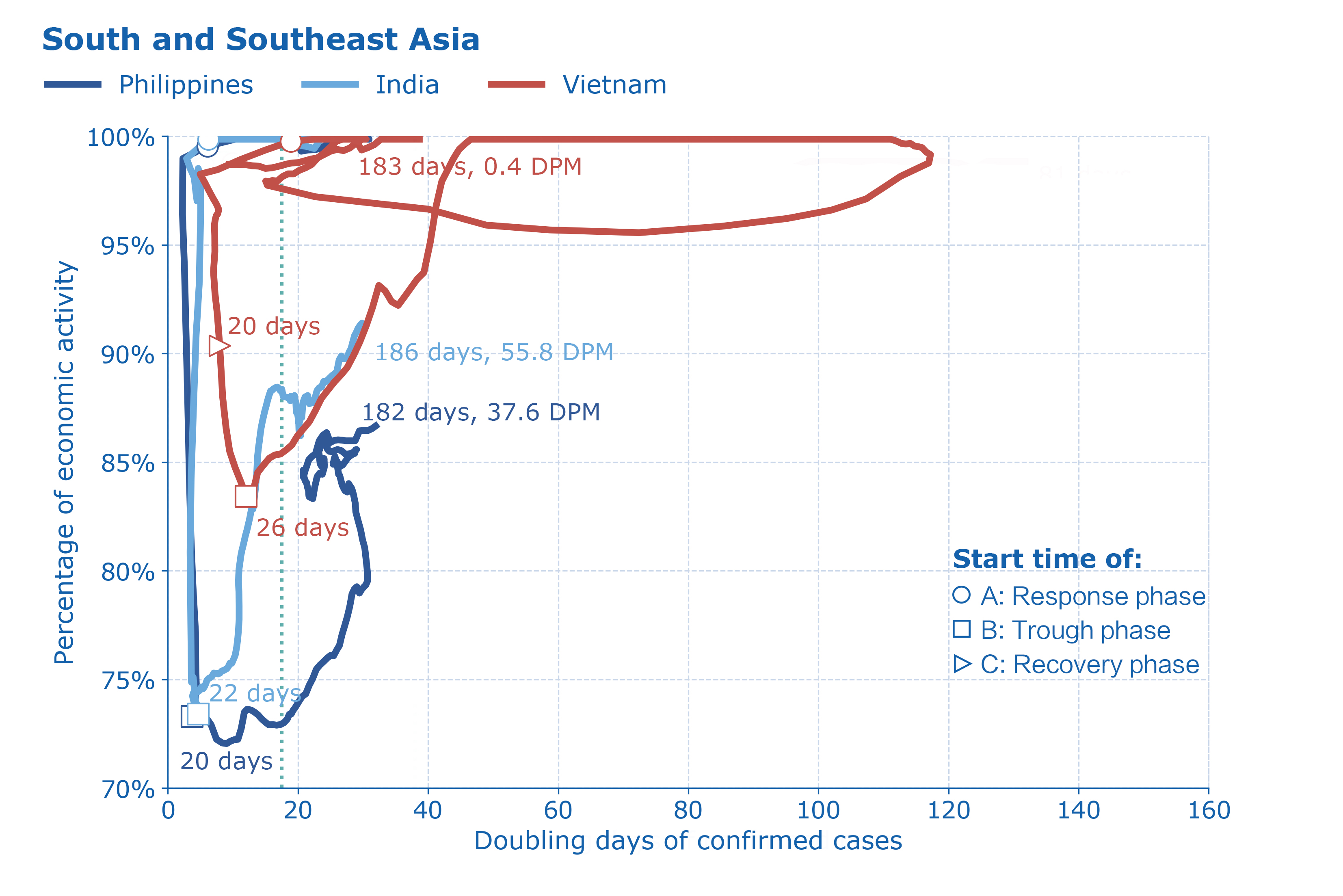 The paths of PET in emerging and developing economies in Asia, Africa and Latin America is much more diverse and complex. A few economies in each region, such as Thailand and Vietnam in Southeast Asia, and Uruguay in Latin America, have adopted more effective epidemic containment measures. Compared with other countries in the region, they had much fewer deaths and are far ahead in their pandemic economy. For example, the level of economic activity in Vietnam had earlier recovered to that of the pre-COVID period, but experienced a bigger second round of COVID-19 cases, during which the level of economic activities decreased by as much as 5%. Rwanda in Africa had earlier successfully contained two rounds of outbreaks, while still experiencing a much stronger third round, but maintained a low death rate of only 1.7 DPM. These examples prove the second pandemic peak cannot be neglected.

More countries, such as India and Argentina, still cannot effectively control the epidemic after more than 6 months of economic contraction, their doubling days are still hovering around 30, not good enough for them to advance to a safer zone of the pandemic economy - the right side of the PET graph. Some have paid substantial life costs. For example, Brazil has a death rate of 613.7 DPM, clearly a result of its fits-and-starts epidemic control strategy.

The Big Pictures: The Economic Stakes

We estimated the percentage of economic losses relative to 2019 GDP for these countries and regions and plotted them with their COVID-19 death rates. The result shows that countries suffering greater loss of life often incurred greater economic losses as well. This indicates that loosening epidemic control to protect economy is probably not a sustainable option. The countries and regions in the lower right corner in Figure 6, currently including many Latin American countries, are in the most difficult situation.

Figure 6. The relationship between epidemic control and estimated economic loss in the second quarter For those upper-left countries right now in Response or Trough phases, they may move lower right into the unluckiest corner if they cannot bring the epidemic under control in a timely manner.

The Evolution of the Global Pandemic Economy​

From a global perspective, as of September 11th , 83 of the 132 countries and regions tracked by the PET system have entered the recovery phase. Prior to this, they spent an average of 91 days in the response and trough phases combined, and another 49 countries and regions are still in either response or trough phase, where they have stayed on average for 179 days. A long-term stay in contraction mode will undoubtedly bring more damages to their social and economic systems.

We will continue to track and update the global pandemic economy on a daily basis, and will soon add interactive features and elements, as well as ways to download PET data, to facilitate more interested parties and professionals to track and compare PET trajectories worldwide.

Help us improve this project: Please email PETproject@luohanacademy.com with feedback, requests, or tips about additional sources of data. Thank you to the many readers and colleagues who have already helped us with feedback and suggestions. We continue to incorporate your suggestions and data every day. We will respond to as many people as possible.

Why PET Can Be a Useful Tool - Understand the trade-offs between the pandemic and the economy as well as tracking them in a precise and timely manner is key for all major decisions, from the community to global levels, to avoid unnecessary costs and find robust recovery strategies.

Five-phase Pandemic Economy Framework - To facilitate a structured way to understand and navigate through the dynamic trade-off between epidemic control and economic activity, Luohan Academy proposes a generic five-phase pandemic economy framework. We have also added an explanation of Interpreting the PET Curve.

Scroll to the top