The outbreak of COVID-19 has had a considerable impact on China’s economy and society. As of February 21, there are more than 75,568 diagnosed patients and 2,239 deaths. But with decisive measures including mass quarantines and community lockdowns at an unprecedented scale, a turning point appears to be in sight as the number of diagnosed cases has steadily declined for 16 consecutive days outside of Hubei province, before a rise in the latest tally due to two separate, unexpected outbreaks in Shandong and Zhejiang.

For the Chinese government, the campaign against COVID-19 has become an intricate balancing act between containing the epidemic and a timely economic recovery. Especially for the micro, small and medium-sized enterprises (MSME), which play an important role in economic and employment growth, a further delay in the resumption of businesses could soon push them towards the brink of bankruptcy; for many individuals, a mass failure of corporates implies a loss of livelihood; and for the economy as a whole, long delays in production could lead to major disruptions to regional and global value chains, potentially causing lasting damage to local industries.

Digital technologies have shown great potential in helping the central and local governments and companies contain the epidemic and prevent the virus from spreading. They could help tackle the rising challenge to manage an orderly return of workers to previously virus-infected areas and revive economic activities. Alibaba and Ant Financial recently took a number of actions to mitigate the negative impact of the COVID-19 outbreak, including contributing to the development of several innovative measures to help contain the spread of the virus. Highlights fall into three categories: efforts to directly combat the virus; economic support; and digital  advancement.

Health Codes in the format of QR (Quick Response) Codes, which is a more sophisticated type of barcodes that have been primarily used to process and validate payments with an elevated level of security and trust between consumers and sellers. Due to their wide use and convenience, governments at various levels have been using QR codes as a new tool to enable a person to report and keep track of his or her health status and assess different level of risks due to factors such as recent travel to areas hit the hardest by the outbreak or recent contact of people from outbreak-stricken areas. With the code, the individual will be able to keep reporting health status to authorities, those who stay heathy can then travel and go back to work.

For example, with technical support from Alipay, AliCloud and DingTalk, in the development phase, the Hangzhou Municipal Government launched the city’s Health Code, which assigns a colored QR code that reflects the person’s health status and outbreak associated risks (see Figure 1). To use the service, Hangzhou users need to fill out an online form with their ID number, and fill in information such as whether they have traveled outside Hangzhou recently, and any symptoms known to be associated with COVID-19 infection Afterwards, the user will receive a colored QR code on his or her mobile phone. According to Hangzhou Municipal government, which operates the service, users with a red code are instructed to remain in quarantine for 14 consecutive days and provide regular check-ins via the city’s Health Code service.; Users with a yellow code should stay quarantined for seven consecutive days; and users with a green code can gain access to travel to the city and go into certain places that requires a green code to enter. After seven or 14 consecutive daily check-ins, a healthy person’s yellow or red code will automatically turn green. Alibaba’s DAMO Academy developed a new AI image recognition algorithm that can effectively diagnose the novel coronavirus (see Figure 2). The algorithm takes less than 20 seconds to run and accomplishes its task by reading thousands of CT scan images, and the accuracy of its diagnoses is at 96%. This is a significant improvement on the existing diagnoses speed and accuracy. However, it should be noted that this diagnoses method is currently only applicable to patients who are at the later stages of exposure to the virus. Alibaba has instituted several safety measures to ensure that employees remain healthy after they return to work. First, as in other places in China, Alibaba offices will undergo thorough disinfection once per day. High contact areas and frequently used spaces (including door handles, elevators, washrooms, etc.) will be disinfected four times per day (twice in the morning, twice in the afternoon). Second, each employee will receive either two surgical masks or one KN95 mask each day. Third, to avoid cross-infection, all campuses will turn off their central air conditioning systems for the time being. At the same time, Alibaba will use air purification systems and ventilation systems to filter fresh air in workspaces. Anyone entering Alibaba campuses will be required to have their temperature taken. Those with a temperature over 37.3 degrees Celsius, or 99 degrees Fahrenheit are barred from entering.

Alibaba Group has made great efforts to help MSMEs, the group of firms experiencing the greatest difficulties during the ongoing crisis. On February 10, it unveiled 20 measures to offer support across six major areas. Among these measures, MYbank, an online private commercial bank for small business under Ant Financial announced a series of measures to help small and micro business owners overcome the economic impact of the coronavirus outbreak, especially those at the epicenter in Hubei Province. These measures are expected to potentially benefit 8.5 million small and micro merchants and facilitate their digitalization transformation. To ease the cashflow pressure for SMEs, MYbank will provide 12-month loans totaling RMB 10 billion to online merchants from Hubei Province registered on Taobao and Tmall. These loans are interest-free for the first three months, and rates will be lowered by 20% for the remaining nine months. -MYbank will also provide 12-month loans totaling RMB 10 billion to Taobao and Tmall merchants from outside Hubei, with interest rates also lowered by 20%. According to a recent online survey by MYbank, small and micro businesses in China have demonstrated resilience during the coronavirus outbreak. Surveying over 20,000 small and micro merchants, the report found that 80% of respondents need short-term funding, while 70% are confident that they can get through these difficult times if funding needs can be met. The survey also found that more small merchants, such as restaurants and grocery stores, are offering take-out services to customers via digital platforms amid reduced in-store foot traffic.

Freshippo, Alibaba’s new retail supermarket, introduced an employee-sharing system that allows those who were working in hospitality, dining, movie theaters, department stores and various other sectors, but currently inactive due to reduced services, to find temporary jobs at Freshippo locations (see Figure 3). Similarly, Ele.me and Koubei’s Blue Ocean plan gives restaurant employees the opportunity to work as temporary couriers or convenience-store clerks. While the “gig” economy is often considered a disruption of traditional employment, leveraging its use in helping stabilize the local job market and economy highlights one of the most encouraging characteristics of the gig economy: it is flexible. 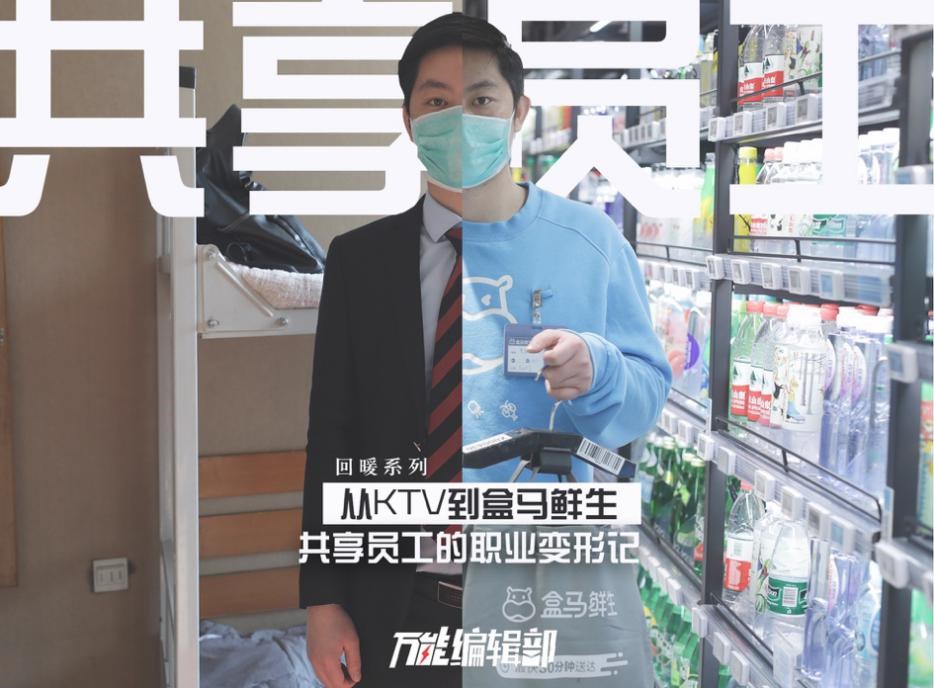 Improving the logistics for recovery

On January 25, Cainiao, Alibaba Group’s logistics arm, launched the Green Channel initiative in response to surging demand for protective clothing and medical supplies, especially for frontline medical staff in Hubei. So far, the Green Channel has delivered more than:

Cainiao has also worked with customs authorities to speed up clearance at airports and ports, cutting the overall shipment time to under three days. It also developed an online system for donors to submit all the necessary documents, which greatly expedited the customs clearance process. Cainiao used this system in Seoul, for example, to speed up the dispatch of 50 tons of face masks onto three Shanghai-bound planes.

In early February, Alibaba Group launched a global business-to-business sourcing platform that aims to speed up the distribution of medical supplies directly to areas in China hard-hit by the novel coronavirus. Known as Alibaba Global Direct Sourcing Platform, it serves as an information bridge, matching sellers of medical supplies and their products with the needs of affected hospitals and municipalities:

In response to the crisis, Alibaba Group has provided businesses access to various resources from the Alibaba ecosystem free of charge. These include Taobao Livestream services for all offline merchants; online courses from Taobao University; and digital solutions and proprietary services from Cainiao.

To assist businesses in handling remote-working, Dingtalk’s “Work from Home” function was made available at no cost to enterprises, allowing up to 302 participants to participate in video conferences, livestreaming and other business-related activities.

To help businesses and employees manage remote-working arrangements, Dingtalk launched various features this month to enable instant communication and remote teamwork, including video conferencing, livestreaming, cloud-based document editing and approval and daily health surveys for employees. These features were made available for free to over 200 million workers from more than 10 million companies and organizations. The platform also added 100,000 cloud servers to support the surging nationwide demand for cloud-based communications that connect those working outside an office setting.

It’s not just millions of small businesses that have been severely affected by the spread of COVID-19. Another group about which Alibaba Group cares deeply includes millions of students and teachers forced to stay at home during an extended period of time. DingTalk’s various features have been made available to them. On February 10, the first day of school after the CNY break, more than 600,000 teachers in China tapped into the app’s livestream feature to deliver their lessons (see Figure 4). Over 50 million students from more than 300 Chinese cities participated in this Online Classroom Program initiated by DingTalk and Youku. However, this didn’t come without a cost, namely thousands of students, who, displeased at having to go back to school showered DingTalk with one-star ratings on popular app stores, most commenting on the displeasure of their break away from school being cut short! Currently, DingTalk is the most downloaded work productivity application on several app stores including Apple (with just a two- star rating due to disgruntled students).

Many of the measures that Alibaba Group has undertaken to combat the COVID-19, have been designed not just to serve the interests of just specific customers or population segments, but more generally the society as whole. Competing tech companies that using DingTalk have access to the same tools at those used internally in the Group. Alibaba’s use of digital technology has helped small businesses and the communities which it operates in to find new, innovative ways to mitigate the impact of the outbreak.

The resilience of the Chinese digital economy showcased during the outbreak has provided a real-life case study of how digital technology can be leveraged to help address a common challenged faced by the society. The QR code powered “Health Code” is a one such example, demonstrating how a technology widely used in mobile payment can be harnessed to address a public health situation. DingTalk is another example - an office collaboration platform can also be used by teachers and students to continue the curriculum online when the outbreak prevents offline classes.

As innovation and novel adoption of digital technologies emerge to mitigate the impact amid of the COVID-19 outbreak, we are seeing an acceleration of digital transformation across sectors, and this process is likely going to unlock more opportunities for economic recovery and growth beyond the outbreak.

Artificial Intelligence: Past, Present and Future