Why We Study "Measuring the New Economy"

AN INTRODUCTION OF "MEASURING THE NEW ECONOMY" BY LUOHAN ACADEMY

"[W]hen you can measure what you are speaking about, and express it in numbers,you know something about it; but when you cannot measure it, when you cannot expressit in numbers, your knowledge is of a meagre and unsatisfactory kind." William Thomson, Lord Kelvin, Electrical Units of Measurement (1883)

Digital technology has been reforming economies in an unprecedented way. It brings new business models, increases varieties of goods, enables the widespread availability of free services, and supports the ever-growing importance of intangible assets. All of these have a profound impact on the measurement of economic activity and thus, how we understand economic prosperity and, ultimately, social welfare.

The Measuring the New Economy program at Luohan Academy works closely with academia, policymakers, and business leaders to achieve cutting edge insights on these fundamental changes and related measurement issues. Specifically, we are interested in the following research questions:

Impact of proliferating varieties of goods on output, income, and welfare

Our understanding of economic growth depends crucially on the key economic indicators released by statistics agencies. Not surprisingly, "real output," which measures what our economy produces within a period of time, is one of the essential indicators among them.

Real output is defined as nominal value of gross domestic product (GDP) deflated by the price index. In the rapidly changing digital economy, although sales of new goods become a part of nominal GDP directly, faster product turnover and quality changes pose growing challenges on the measurement of real output and productivity.1

Consider an economy that consists of one product – apples. If a new product – pineapples – appears and demanded in the market, while the price of apples remains constant, the statistical agency will conclude the inflation as zero. However, as consumers tend to favor more varieties, the introduction of new product will effectively reduce the cost of living overall. Failure to account for variety growth would overestimate inflation, and therefore underestimate real output and productivity growth.

Admittedly, the discussion over potential bias of price index is not a new one.2  What is interesting is that digital technology is providing new tools and data resources to tackle age old measurement questions.

In addition to the issues of aggregate output and productivity measurement, the rise of digital technology greatly bolsters the availability and varieties of goods for consumers in big cities and, more importantly, for those living in rural areas. For example, the advent of the e-commerce platform facilitates higher gains for groups previously less integrated into the economic system. Meanwhile, measuring the real income growth across different populations is the basis for many redistribution policies and welfare programs.

Beyond the measurement of current economic activities, we seek to understand the implications of greater goods variety for competition, economic growth, and consumer welfare. How should firms innovate to compete in the age of plenty? Will economic growth accelerate or decelerate? Does the variety-driven economy enlarge the gap between GDP and consumer welfare? These questions are vital for us to explore as we envision the possibilities brought by a variety-driven economy.

Traditionally, business investment describes mainly physical assets such as production machines, vehicles, and factories. However, since the beginning of the information technology revolution, spending on things that are hard to see or touch, such as computer software, a firm's intellectual property, and internal knowledge, becomes increasingly important. 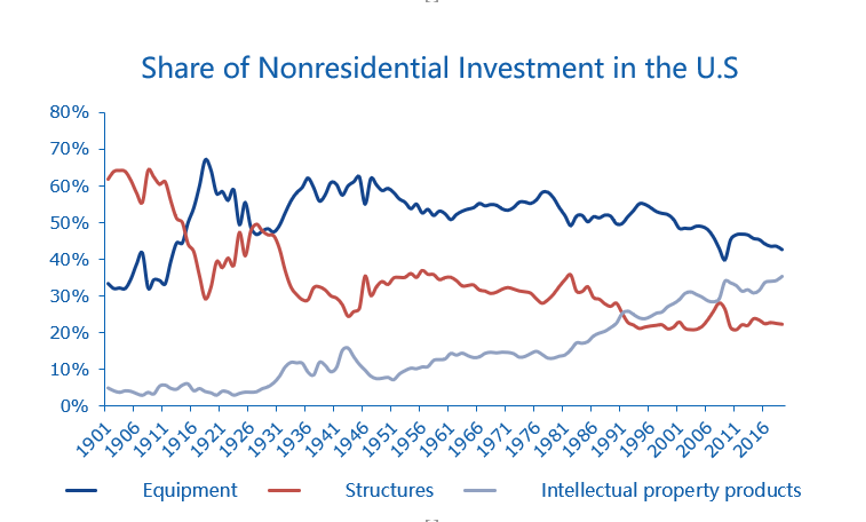 The figure above illustrates the decomposition of nonresidential investment in the U.S from 1901 to 2019. The share of investment in IP products increased dramatically over time. As of 2019, investment in such products comprised about 35% of total nonresidential investment. Concurrently, the revenue and market valuation of big-tech companies – which invest mostly in this group of intangibles – skyrocketed. As of 2019, the combined revenues of five U.S tech giants totaled almost $900 billion, more than the GDP of the last four of the G20 nations.3

What this striking evidence illustrates is an ongoing paradigm shift in business operation. Intangible investments, such as marketing and R&D, became the most important element for firm growth; intangible assets, such as software and brand, became the most valuable assets in market competition.

What is unique then about intangible investments? As emphasized by Haskel and Westlake (2018), one of the key differences between intangible and tangible investment is scalability. Physical assets can only be utilized in one place at one time. In contrast, intangible assets can be deployed in multiple locations at multiple times. Coupled with the use of Information Technology, firms can serve customers in every corner of the country and deliver timely and responsive services. The shift in production technology changes business strategies, market dynamics, and eventually economic growth and consumer welfare.

The rise of intangible spending also poses a challenge to the measurement of economic activity. The bulk of intangible expenditures, such as marketing and patenting, is not counted toward investment in the measured GDP.

If we were to properly account for the value of intangible assets, how should we measure them? Unlike physical assets, which are valued at market price, there is no explicit market for intangible assets. In a recent paper, Corrado et al (2009) showed that adjusting measured GDP by adding the cost-based measure of intangible capital can significantly increase measured productivity growth.

Rise of Free Services and Welfare

Enabled by digital technology, private firms have been able to provide free services where consumers spend a majority of their daily leisure time. The information and entertainment services, such as those provided by Google and Youtube, are usually available with no price tag, reflecting the low marginal cost in the production of information goods and a shift in business models.

With so much leisure time allocated to these services, the current national account does not properly capture the value of those services, due to the fact that they are usually free to the consumer. GDP is widely used as the proxy for welfare; however, there appears to be a widening gap between the two.

Income growth, as currently measured, fails to account for the value of free services. Together with low measured productivity, the statistics have created pessimism about the current economic system and upcoming technical changes, and have exacerbated mobility concerns. As reported in a CNN/ORC survey by Long (2016), 56 percent of Americans said they think their children will be worse off than they are.

As free services proliferate, a framework is needed to measure and understand its implications for consumer welfare. With that, we can better evaluate economic progress and be better positioned to reap benefits from new waves of technological change.

1  The most commonly used notion of productivity is labor productivity, which is calculated as the ratio of real output to employment.

2 The vast literature bearing on the measurement of changes in real output of the economy reaches back to Marshall (1887) and Kuznets (1934).

3 The five companies we refer to here are Apple, Amazon, Alphabet, Microsoft, and Facebook.

Why We Study Platform Economy

Why We Study Digital Technology and Inclusive Growth