A Resilient China Leans on its Digital Ecosystem

This year Spring Festival festivities were overshadowed by an outbreak of novel Coronavirus. The virus and the subsequent media coverage mean how the outbreak is being handled at all levels is being put under the microscope. What’s being uncovered is by no means all positive. However, this increased attention also shows a China that is reliant on digital services. For example, according to Quest Mobile, a Beijing Based Data Intelligence Platform, the daily use of mobile users passed the six billion hours on February 3. It is these digital services that have allowed businesses to thrive, enabled the exchange of vital information and updates, and been a source of entertainment. In many ways, the coronavirus's impact on China could have been much worse, if not for digital services, the logistics networks they rely on, and the workforce behind them.

In the week after the Spring Festival, besides companies that provide necessities such as restaurants, supermarkets, and pharmacies, the affected areas around the country practiced a systematic self-quarantine. Residential communities enacted procedures to limit non-residents from entering compounds and also in some cases only let one person from each household leave the compound, once every two days. Preventative measures like these were mostly successful in stopping the spread of coronavirus. However, it also impacted business and commerce. Bound to their self-quarantine at home, citizens relied on digital services to obtain vital supplies they needed for the upcoming days or weeks.

Throughout the self-quarantine, digital services remained open for business. Ele.me and Meituan, two of the most extensive food delivery services in China, stayed accessible and fulfilling orders both day and night. Large scale grocery stores and supermarkets, such as Freshippo, also remained open and fulfilled requests throughout the day. It was these services that the majority of populated areas relied on throughout the period and were a crucial lifeline for communities.

Since the outbreak was first reported in late December, media coverage of China has intensified to 15% of all monitored articles online. This is almost triple the average coverage, which is usually between four to five percent according to GDELT data. To put this in perspective, world coverage of the virus is two percentage points higher than coverage of the US-Iran conflict earlier this year, which almost resulted in a full-blown war.

The media coverage explosion, both in and outside China, while partly because China is thoroughly established in the global system, is also primarily due to the slew of online and social media coverage that the virus has sparked. China's digital ecosystem has been ubiquitously employed to cover a national news story that affects nearly every citizen. Besides, a handful of international media outlets based in the country have been influenced by millions of ordinary citizens who have taken to social media platforms to document their experience, share news, and update their friends and families on their wellbeing. It has led to posts spanning the emotional spectrum, from humor to terror and from sadness to hope, including the mourning of Dr. Li Wen­liang, one many unsung heroes of the epidemic. ​

Digital technology has also been one of the primary sources of entertainment for a nation stuck at home. Recently, much of China has started to get back to work, many families relied on subscriptions to iQiyi, Youku, and Tencent Video to binge-watch their favorite television and movies. With movie theatres closed due to the virus, some films bound for the box office during one of the most profitable times of the year, released their movies on those very same platforms for free. China even live-streamed the construction of Huoshenshan Hospital, which was built in just ten days to treat infected patients. The live stream attracted tens of millions of viewers who called themselves "cloud supervisors."

Social media companies such as Tiktok and Kuaishou both reported an uptick in users and traffic amid the virus. Many of the videos uploaded to Douyin and Kauishou went viral on Weibo (China's Twitter-like service), including a video of a family playing badminton in their living room.

To stay fit while trapped indoors, health-minded Chinese citizens relied on online work out plans and applications live-streamed classes. Keep, China’s number one fitness app, hosted three free live-streamed classes on various social media platforms, three per day, and recorded an 18% uptick of followers in the first five days of the virus. The virus has also been a blessing in disguise for the gaming industry in China. While China is never short of gamers, mobile gaming did receive a boost.

Besides being a source of entertainment and humor, social media and digital services played a crucial role in keeping the nation abreast of the current events and best practices to control the outbreak. Alipay, and Alihealth, all issued updates through their applications and Amap, one of China's most popular map platforms, mapped the nearest hospitals in case a user showed symptoms. At ground zero in Wuhan, the service implemented policies that allow medical professionals and volunteers free rides. 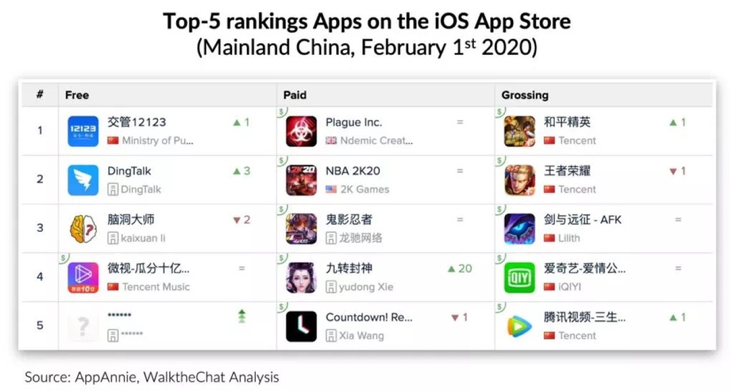 Over the past ten years, China has developed the largest telecom network in the world, and at the same time, has become the biggest market for digital services. Because of this, it has also arguably become one of the most tech-savvy countries in the world. Just as the virus hit, almost overnight, programmers had coded applications and mini-programs that listed up-to-date virus information as well as used location data to map virus cases in one's direct vicinity. Digital services also allowed the nation to return to work, Bytedance, Wechat Work, and Alibaba's DingTalk enabled workers to work from home seamlessly. DingTalk, for example, allowed companies to register a free business account for businesses to get back online and back to work.

As the virus winds down and infection rates slow, the Chinese economy will be dramatically affected. However, even in this regard, China’s strong digital economy will help curb its impact. Alibaba recently launched a series of measures to ramp up efforts to help merchants during this challenging period, including reduced or waived platform fees, low-interest and interest-free loans, subsidized delivery personnel and increased logistics efficiency, creation of flexible job openings, tools for accelerating digitization and remote work management.  These measures exemplify what a digital economy can do to support small businesses and the real economy. For example, Ant Financials’ online bank, MYbank, emphasized that they will continue to provide lines of credit to the more than 50 million mom-and-pop shops, which represent more than 100 million jobs. MYbank exemplifies how the digital economy can support small and micro-sized enterprises, which otherwise might not have the collateral to receive a line of credit.

While 2019-nCoV has negatively impacted nearly every Chinese citizen, digital technology has helped showcase and, in some ways, define the resiliency of the Chinese people. The uniqueness of the Chinese digital economy and ecosystem allowed them to adapt to the situation in ways few other countries could replicate.  Still, as the nation reels from the outbreak, special gratitude is not only owed to the medical staff around the clock in combating the virus, but also every delivery driver, supermarket attendant, data engineer, and programmer that makes many of these services possible.

Understanding the Flow of Data