With the onset of flu season, a new wave of the COVID-19 pandemic accelerates around the world. Infection rates have risen to levels unseen since the spring, putting Europe and North America at the epicenter of this pandemic once again. The two regions have reached a weekly record for confirmed cases, accounting for more than 60 percent of the more than 400,000 daily newly confirmed cases globally.

A dark time looms ahead of Europe, North America, and the world until the delivery of safe and effective vaccines. We’ve generated eight charts to help understand the trajectories of countries in Europe and North America and the economic challenges ahead.

Cases of COVID-19 soars as the second wave of the pandemic sweeps across Europe. In North America, the United States dominates the new surge in cases as third wave emerges. Europe and North America have the highest death rates in the world, with the exception of Latin America. Death numbers surges in Europe since late September, while the death rates is far lower than that during the peak of its first wave. 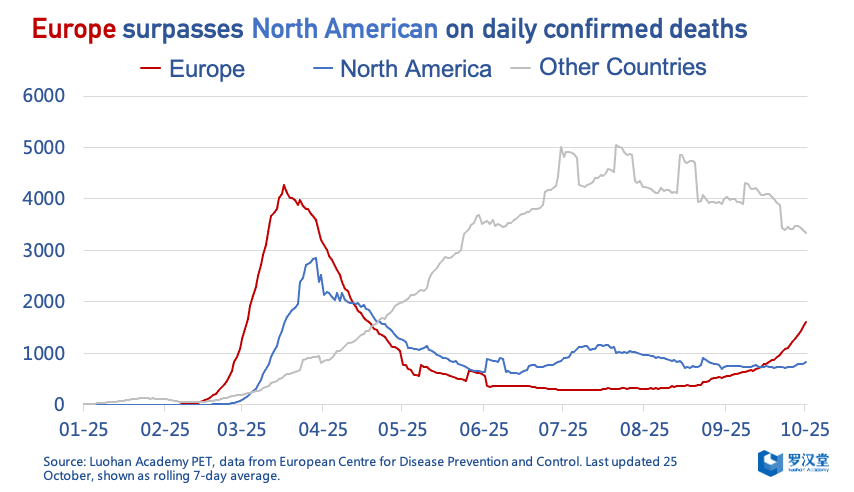 Since October, countries in Europe and North America have increased the scale of testing. In the meantime, positivity rates in both regions are escalating exponentially, especially in Europe, indicating an fast acceleration of epidemic growth. 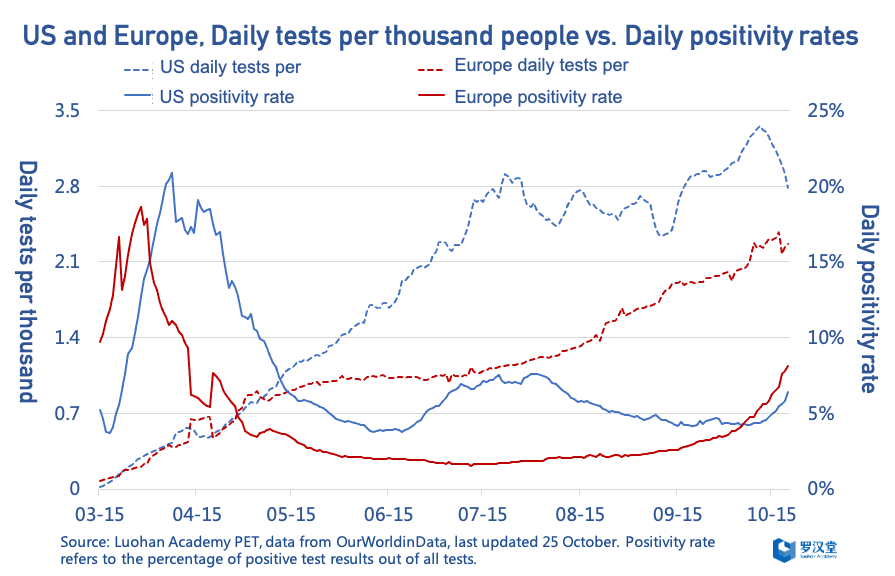 4. True infection rates in the Americas are higher than other regions including Europe, but still far below the herd immunity threshold

According to model estimates from epidemiologists at the Imperial College London, worldwide highest infection rate of a nation stands at about 26 percent. Europe and North America, both among the highest infected regions, have infection rates of no more than 15 percent, far below the 70 percent threshold required to reach the effect of herd immunity. Loosening up COVID-19 measures and restrictions is not an option. 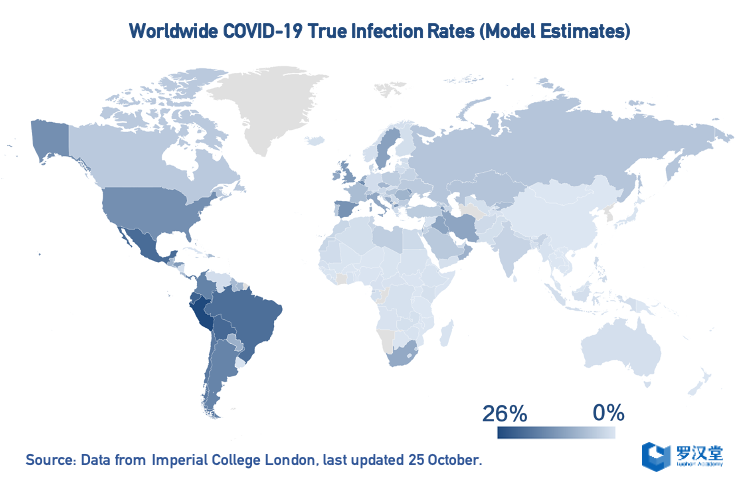 5. COVID-19 Hospitalizations in Europe and the US are lower than the first wave, but that in Europe is increasing at a faster rate

Since September, numbers of weekly hospitalized COVID-19 patients in Europe and the US are increasing steadily, especially in Europe. With the flu season approaching, the European and American healthcare systems are facing tremendous pressure. 6. The summer increase in mobility and travels fueled the current wave of infections

Domestic and international flights have significantly decreased in Europe and North America in 2020 compared to 2019.  But as flight numbers and regional travels start to recover since June, mobility of populations, especially those long-range travels, rebounded strongly. This largely explains why this wave of outbreak is more widespread and synchronized across Europe. September marks the beginning of the second wave in Europe, prompting a decline in flight numbers. Travel restrictions are expected in the region for the upcoming winter; however, the measures were not soon enough to stem the second wave. 7. Many European countries and the United States have yet to impose stringent measures in response to the current outbreak

The levels of economic activities in Europe and North America show clear patterns of correlations with the strictness of each government’s policies to contain the virus. The United States and Sweden had the least strict policy throughout the pandemic, while the United Kingdom and France have loosened their policies since the summer. Spain and Ireland have announced new restrictions and lockdown policies as the cases surge in recent weeks. Ireland is the first to imposed a six-week national lockdown more than a week ago, while France and Germany just pressed to follow their own lockdown policies. The strict mitigation measures during the first wave enabled Europe to restore population mobility and economic activity temporarily. With the new wave of outbreak, Europe faces a hard dilemma between virus containment and economic recovery. 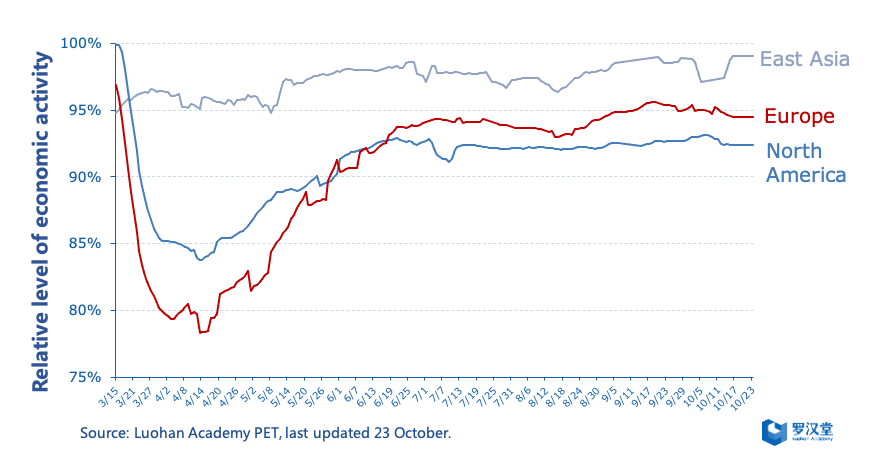 Worldwide the development and production of COVID-19 vaccines are taking place an unprecedented pace. Several vaccines developers are due to finish their phase 3 trials and obtain approval by the first quarter of 2020. But the new wave of outbreak is sweeping around the world, and it’s inevitable that countries in Europe and North America are going to have a grim winter ahead without an effective vaccine. The hard lesson we learned from the efforts to halt the first wave of the pandemic is that, as the new wave surges, more countries need to take decisive measures and impose strict lockdown policies to effectively contain the virus, like what Ireland just did.