Florida as a Developing Country

During the first waves of the COVID-19 pandemic in Asia and Western advanced economies, there was a clear pattern of lockdown, containment, and gradual economic reopening. But now a third pandemic wave has brought a new, more disturbing pattern to both developing countries and major US states.

HANGZHOU/MILAN – The COVID-19 pandemic has arrived in waves, starting in Asia, where it quickly spread from mainland China to South Korea, Hong Kong, and Taiwan. These governments all reacted quickly with aggressive tracking, tracing, and containment programs, and China induced a massive but short-lived economic contraction to stop the virus more or less in its tracks.

Meanwhile, a second wave, now in its middle to late stages, has swept mostly through the developed economies of Europe, North America, and Oceania. As in Asia, there has been variation in containment approaches and results across countries; but, generally speaking, most of these governments responded late, allowing the virus to spread widely before introducing countermeasures.

In any case, the pandemic has followed a clear pattern in both first- and second-wave economies. After a sharp economic contraction (phase one) comes a trough (phase two), when the virus’s rate of spread is reduced to the point that recoveries exceed new confirmed cases. Then comes a period of gradual, sequenced reopening, with precautions to contain the virus remaining in place (phase three).

The pandemic’s third wave, however, has taken a different shape, and is raising serious concerns. Though it arrived later, it is quickly sweeping most of the developing world, home to two-thirds of the global population. Moreover, this wave, which now accounts for over 60% of confirmed new cases, has left an alarming number of highly populous countries stuck in the pre-phase three period of the “pandemic economy,” with the economic and public-health crises both essentially spinning out of control.

The apparent difficulty in controlling the spread of the virus even with sustained periods of economic contraction is a unique and disturbing feature of the third wave. And as Figures 2 and 3 show, it can be found in a wide range of countries in Asia, Latin America, and Africa.

In most developing countries, a significant proportion of the population lacks the resources to withstand an extended economic lockdown, and the government’s fiscal capacity to provide a buffer is limited, sometimes severely. As a result, many of these countries will have no choice but to begin reopening their economies regardless of whether the virus has been contained.

Despite the tragedy that is unfolding across the developing world, the third wave has received somewhat less attention than the crisis in the United States, where aggregate nationwide data obscure the fact that there are now two pandemic economies within the US, each with a very different pattern. Several states in the South and Southwest are increasingly exhibiting, or reverting to, the same third-wave pattern observed in developing economies: economic opening with rapid virus spread.

The latest data on new infections in Florida suggest that cases are doubling at a rate below 19 days, which puts the state’s outbreak firmly in the “uncontrolled” phase. And a similar recent pattern can be found in Texas and several other states.

In the US, 27 states lifted their stay-at-home orders before May 15, while the remaining 23 states started reopening on or after that date. As the data for new cases clearly show, the earlier openers have experienced a significant increase in infections. Of course, even among the states that started reopening before May 15, the pandemic economy has taken different trajectories. Whereas California has stalled in the virus-containment phase, other states (Florida, Texas) are slipping back into the danger zone, with doubling days at or below 18.

Meanwhile, among the states that lifted their stay-at-home orders on or after May 15, the majority (including Minnesota, Washington, and hard-hit New York) exhibit the typical second-wave pattern of slow but steady movement toward fewer new infections and increased economic activity. A notable exception is Arizona, where active cases are again growing exponentially. 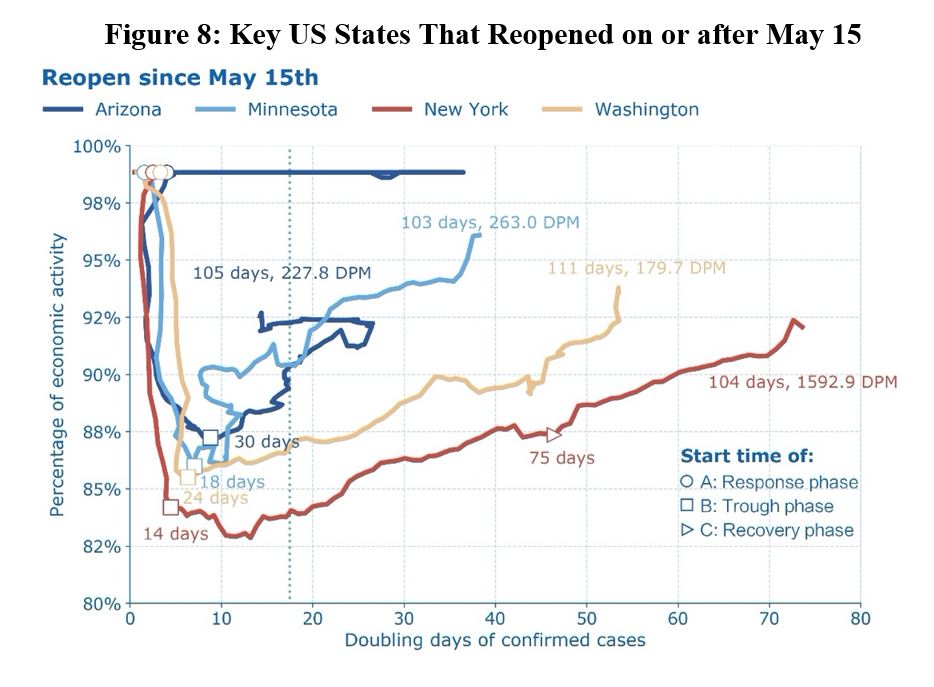 The most plausible reason for these states’ relapse is that their leaders reopened prematurely, too rapidly, or both. It may be that some state governments simply decided that the tradeoff between virus control and economic recovery should be tipped in favor of the latter. It is also clear that some states and localities have taken enforcement of precautionary measures (social distancing, mandatory face masks) more seriously than others. And, notably, these “third wave” states lack substantial testing and tracking programs, which limits their capacity to contain the virus and raises the risks of reopening.

The explanation for the deepening crisis in developing countries is obvious: many lack the economic, medical, and fiscal resources with which to contain the virus and support their populations through an extended lockdown. But these reasons cannot reasonably be applied to an advanced economy like the US.

As a result, it seems that one part of the US will follow the second-wave pattern, alongside Europe, Canada, Australia, and New Zealand, while another part takes a path similar to that of the developing world. But unlike developing countries, these third-wave US states will still have the option of changing course, possibly catching up to the second wave, provided that they can muster the political will to do so.

​Chen Long, a former chief strategy officer at Ant Financial, is Director of Luohan Academy, Executive Provost of the Hupan School of Entrepreneurship, Chairman of Alibaba’s Research Council, and a member of the International Monetary Fund's FinTech Advisory Group.

Michael Spence, a Nobel laureate in economics, is Professor of Economics Emeritus and a former dean of the Graduate School of Business at Stanford University. He is Senior Fellow at the Hoover Institution, serves on the Academic Committee at Luohan Academy, and co-chairs the Advisory Board of the Asia Global Institute. He was chairman of the independent Commission on Growth and Development, an international body that from 2006-10 analyzed opportunities for global economic growth, and is the author of The Next Convergence: The Future of Economic Growth in a Multispeed World.

Slashing Enforcement and the Limits of Smart Contract

DeFi and the Future of Finance