Long Chen, director of Luohan Academy, discussed Nebojsa Nakicenovic's presentation. The following text features transcripted excerpts. It has been lightly edited for clarity and lengthntial of this field and reinterpreted the main issues from an economic perspective.

Long Chen, director of Luohan Academy. Long has rich experience in both industry and academia before joining Ant Financial and now attends the Luohan Academy. He was a tenured professor at Washington University in St. Louis, and later a professor at Cheung Kong Graduate School of Business (CKGSB), a leading business school in China. Long, please take it away.

Thank you, Neng. And thank you Naki for your insightful presentation. I believe my discussion follows naturally. The title of my discussion and my thoughts is "The Digital Platform Solution to Sustainable Consumption".

I think we all agree that the world economy is a different growth model. The question is how, as you can see that there is a clear positive relation between the GDP per capita and carbon emission per capita. So, the task, the challenge is to decouple the two.

And as we know that the solution is something called a circular (or regenerative) economy. The essence of circular economy is to reduce the waste by using the renewable energy and recycling on the resource side. And on the use side, we can essentially improve the circulation or the regeneration of the resources along the whole value chain by doing things such as sharing, co-ownership, redistribution, re-manufacturing, maintenance, a lot of things and some of them mentioned by Naki. And transformation to the circular and regenerative economy presents a major challenge. But in the meantime, according to different calculations, it also means trillion dollars of new business. This is what lies ahead of us. The circular economy also fits the UN SDG12, which is "Responsible Consumption and Production".

Now, there are two complimentary approaches to this. One is initiated by the government and coupled with the carbon market. It is imposed on the producers and passed on to the consumers, which is a very important route. Another way is the bottom-up approach, a bottom-up market-based approach that [better] connects the consumers to the producers. But it's not about just connecting the two. There's a lot of challenges and some of them are briefly mentioned by Naki.

For example, how can we change people's perceptions and the norms? How can we foster trustworthy green premium to incentivize all parties when you're in the marketplace? How can we reduce the cost of green-related decision making and implementation? Unlike the government policies, it requires both technology and smart business designs in a marketplace, and this is the theme of my discussion. I believe that digital platforms can play a critical role in this regard. 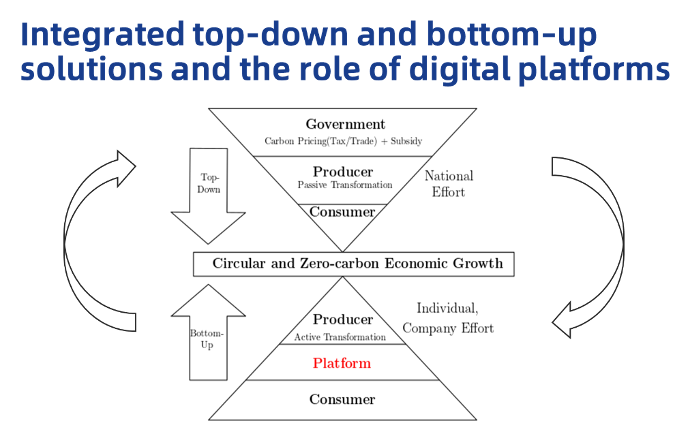 Now, it's not just about linking. So why does the digitized marketplace play a role that is complimentary to the top-down approach while it can bring more inclusiveness. Because it enables high level participation and beneficiaries to reach the necessary economy of scale. Also it makes a lot of the components of the circular economy measurable. It provides incentivization for all the participants. It builds trust, green-related trust, in the marketplace. It promotes circulation of the measurable green benefits and makes it valuable and transferable. So all those things need technology to power the business decision.

Let me give you several examples. One is the so-called Ant Forest, I have talked about this before. Basically, Ant Forest is an application on Alipay that uses digital technology to track users' carbon footage upon their approval.

So let's say Naki decides that he wants to take the subway rather than drive his car to work, which leads to a reduction of the carbon emission. And that can be measured and translated into a little green ball you can see here. And you can collect those little green balls and this virtual tree will grow in Alipay. When it grows into a mature tree, a real tree will actually be planted in the desert areas where forests are needed. In this particular approach, it actually uses the digital technology to measure the green behavior. It incentivizes both the consumers and business. The product was actually created in my office. Initially it was like a game back in 2016.

I was always worried that after a while, people would be tired of this, but now it turns out it is still surviving very well. Now it has more than 560 million active users which means nearly 7% of the global population. They're watching their green behavior and they are planting trees effectively every day. And they have planted more than 220 million trees. I was always worried that they'll be tired of the game, but then gradually I realize that actually when consumers are reminded that this can helps plant trees actually and help poor people, they are willing to do that. So they have incentive to do that if the procedure is simple and convenient enough. Of course, if the consumers care and the business will also care, because that helps them build the reputation. So this is a good example that using the digital technology can provide measurement and incentivize both consumers and the business.

Another good example is Craiglist in the United States, as we all know that Craiglist has close to 1% of US population that buy and sell the used products and reduce the waste, which is wonderful. In China we are seeing the similar things. So there was something called IdleFish, which was created back in 2014. And now, by the end of last year, it has more than 300 million active users. And the transaction amount will exceed $77 billion by the end of this year. That is a largely used-commodity market, and, as you can see from this graph that actually people are very used to trade the products across the tiers of the cities. It's not just local, it's across the cities.

How do you do this? It's not just by linking the second-hand products and the buyers. Actually, the digital marketplace does a lot of things. For example, it has to introduce the professional appraisers for the second-hand products, otherwise people don't trust it since the quality is uncertain, unlike the new stuff. It also introduces the third-party insurance company. It also provides users the Sesame credit, which is the credit score to make sure there is very little default. And also it bridges with the e-commerce platform so that after people bought the stuff, they use for a while and want to resell. It's just one click. So all those designs help to build the trust. I think the second-hand product market is becoming popular in the world right now and young people really love it.

So that is a good example of the circular economy, but that actually create interesting challenges, for example. When you have those circulations, you actually separate the production from the consumptions. But actually a lot of these activities is not counted in the GDP. I believe that in order to achieve the circular economy, the things like Naki mentioned, we need to learn to measure economic progress that's more linked to the environmental goals.

There are other examples in the circular economy using digital technology, including an example of Cainiao, a logistic company. A platform uses the sustainable logistic and packaging powers, and essentially it's very much like Amazon, using the smart shipping routines and storage locations to improve the efficiency of the logistic and packages and largely reduce the waste. For example, right now, it has more than 130,000 posts that can collect the packages back. Look on the Double Eleven, the 11.11 Festival back in 2020, there were 100 million boxes recycled in 2 weeks, powered by Cainiao.

Similar practices are done by Apple and Amazon. So I don't have time. Let me wrap up. I think the key for the net-zero growth is a transformation to the circular economy. Besides the government-led top-down regulation coupled with carbon market, a large section of the circular economy to be successful needs its green components to be measured in a trustworthy way, contributions priced and transferable, and all parties incentivized. This requires technology and mechanism design.

So as we shall say, re-commerce platforms, as a marketplace for allocation, can play a critical role. In China, many meaningful attempts involving hundreds of millions of people, countless products and behaviors including green finance are taking place. Digital platforms, properly aimed and designed, can be a good place for promoting digital net-zero transformation. It's happening in China and in US and in many other parts of the world. This is, I believe, just a start. More research is needed to make it work better and make it applicable worldwide. Thank you.

Sustainable Finance and the Transition to Net-Zero

Digital Finance and the Real Economy