Jason Furman is the Professor of the Practice of Economic Policy jointly at Harvard Kennedy School (HKS) and the Department of Economics at Harvard University. He served as the 28th Chairman of the Council of Economic Advisers. Furman has conducted research in a wide range of areas, including fiscal policy, tax policy, health economics, social security, technology policy, and domestic and international macroeconomics.

Now we're going to go to our last invited speaker before we go to the open session, I do want to acknowledge that we're a little bit behind, about 15 to 17, 18 minutes, but hopefully that will still leave us enough time. Jason needs little introduction. One of us that has straddled academia and policy in ways that few have. I also like that, I'm kind of sandwiched between Eric and Jason because probably close to 30 years ago, Eric taught microeconomics to me and many others. And I was the teaching assistant who helped Jason go through some of the stuff and I hope I was useful. So, Jason takes it away.

Great. Well, you can be the judge as to whether or not you were useful. Steve, I will stay within my eight minutes and I don't need a reminder until it's too late. Have a few slides to share. 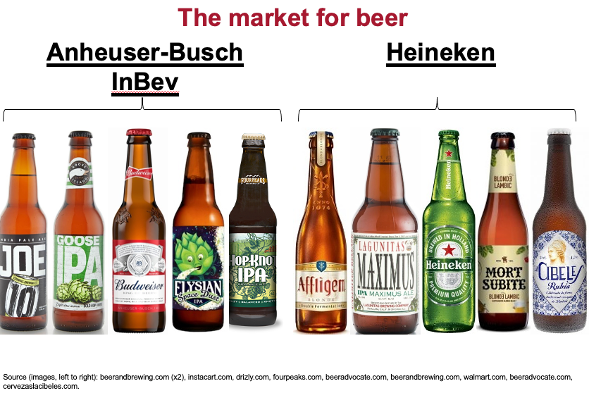 This is the market for beer. This product is much older than any of the digital products we're talking about by several millennia in the United States and around the world. Most of the beer we have now is made by two companies, Anheuser-Busch InBev and Heineken. This consolidation is something we've seen in a wide range of industries throughout the economy. As I hope I learned correctly saying increased concentration could mean that there's more competition that Walmart comes in. It's really efficient. It drives others out and there's more competition. But it could also mean less competition, if it's the result of less antitrust enforcement, greater regulations and other barriers to entry. I think in some sectors of the economy, it's pretty clear that the increased concentration is good. In the retail sector, which is in blue. You see more concentration, but you see lower markups and big gains in efficiency. In the healthcare sector, I think that's an example of a problematic increase in concentration in the United States. You see a similar increase in concentration to retail, but you see larger markups and very few gains in efficiency. Broadly speaking, hospital mergers let you raise prices. They don't actually let you do anything a whole lot better.

I give you all of this preamble because for me, this is the context for thinking about Google, Facebook, Amazon, and other similar companies in China like Alibaba, Tencent and the like. Are they good sources or bad sources of growth? They've all grown enormously in part that's for good reasons, because they're like retail companies that have the efficiencies associated with retail, and in part that I think is for bad reasons, as they've made deals with themselves, with others, created technological standards and data. That's a barrier to entry and a certain amount of the size represents a series of mergers, all of which are unchallenged. So not the organic growth you see with Walmart, but something more like the mergers that you see with hospitals.

Having in mind that there are both good reasons for the growth and bad reasons for the growth to me is fundamental for thinking about any policy issues. I chaired an expert review panel for the United Kingdom. We came out with a report called Unlocking digital competition, nearly two years ago now. The United Kingdom is implementing all six of the strategic recommendations that I made in the report. Things like it are being implemented in the European Union and are under debate in countries around the world, including in the United States. Our analysis was very much motivated by this big picture, good competition and bad competition story I was just telling you. In particular, we went through several questions. The first question: is competition beneficial? That's not always obvious if we're using a digital platform for a bad purpose, e.g., sharing child pornography, you don't actually want more competition. That's not the solution to that. But I think it's beneficial to a lot of things, including to privacy, which is something that consumers value. With more competition, you get more of it.

Is the lack of competition costly? I think yes. In terms of quality innovation and the price you pay in the form of privacy and the like.

And then you have to ask could competition policy, solve this and be an improvement? This in some ways is the hardest. Maybe you've convinced yourself that these markets are winner-take-most, they're prone to massive amounts of tipping. And you can never do anything about that. So, you'd want utility regulation. 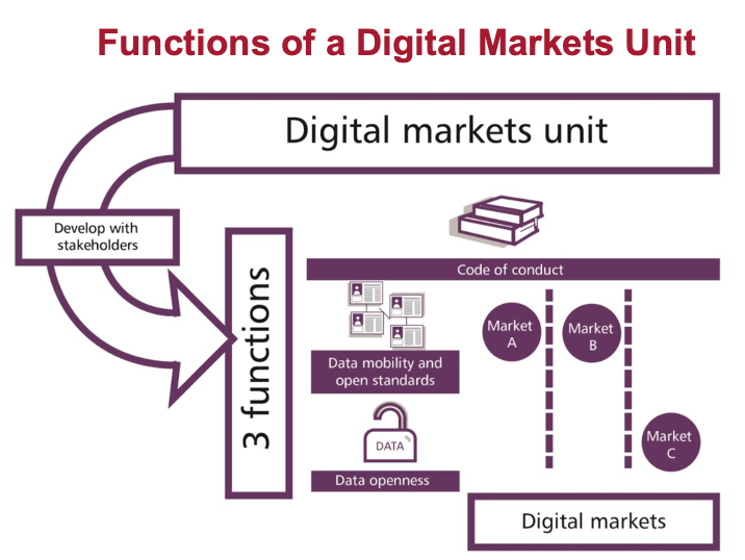 It would establish who, we called them strategic market status, the large companies with bottleneck power that you basically need to go through in order to do what you want on digital platforms. It would designate them and apply a code of conduct to them. The code of conduct is something that the UK has been developing and will be releasing in April. It's something that the European Commission also put out for comment in December. Broadly speaking, it's you can't preference yourself. You can't exclude others from your platform. You can't tell them they can't be on other platforms. It's not wildly different than what you have under antitrust rules already, but it is spelled out in more detail in advance. It's ex ante regulation, which I think works better in a world where ex-post enforcement can take a decade, the behavior can move on, the market can move on and the like.

Second, data mobility and open standards. This basically says, rather than thinking of this as a natural monopoly, like the cable wires to your house, some of the monopoly is unnatural. It's based on technological standards, which are designed to make it harder to interoperate and this would be regulation that would push more in that direction. I think this is the most important part of it, but I think traditional merger and antitrust enforcement has a role to play.

I think there've been too many false negatives where a merger was approved that caused a problem. We haven't seen any examples of a merger that wasn't approved, that the lack of approval caused a problem. So, I think we need to prioritize on digital mergers and shift towards focusing on potential competition and future innovation, highlighting the relevance of data assets and taking into account transaction value. None of this lends itself to the precise econometric estimates of what happens to the price of gasoline. If two gas stations merge, we are going to need to shift the evidentiary standards a little bit in order to accommodate this.

Finally, in my last 10 seconds, there are efforts going on around the world. I don't think there can be a single global regulator or regulation in this area. I think what we should hope for though is convergent regulation that is similar in similar countries around the world. That would be a little bit like antitrust rules are today that would allow companies to have predictability and effective global operations. Thank you.

Thank you very much, Jason, you actually gave me 30 seconds back. So, you were indeed accurate. And if I need to take credit for some of what you said, then that makes me very proud. So, thank you for that.

Data and Externalities in the Digital Age

The Value of Data and Job Search